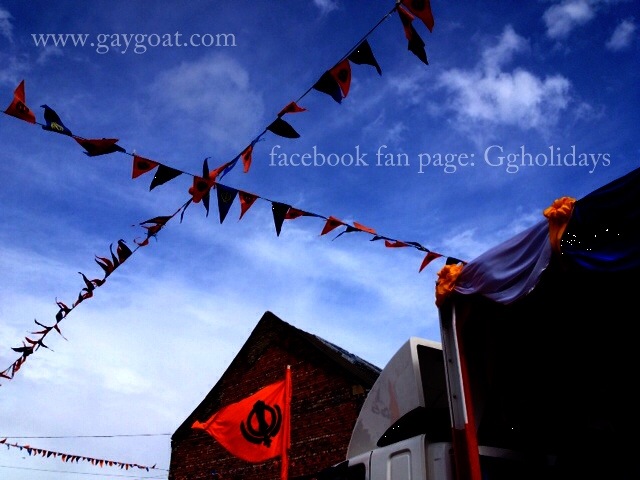 Vaisakhi is a very important day for Sikhs and one of the most colourful events in the Sikh calendar. It occurs during mid-April every year and traditionally concurs in Punjab with the first harvesting of the crops for the year. So, historically, it has been a very joyous occasion and a time for celebration. However, since 1699, it had marked the very significant dharmic event of the creation of the Khalsa. Khalsa which means ‘pure’ is the name given by Sri Guru Gobind Singh Ji, the tenth Sikh Guru, to all Sikhs who have been initiated by taking Amrit (ambrosial nectar / deathlessness) in a ceremony called Amrit Sanchar. The first time that this ceremony took place was on Vaisakhi, which fell on 30 March 1699, at Anandpur Sahib in Punjab, India when Guru Gobind Singh ji wielding a sword asked for five heads and upon the call being answered, initiated five Sikhs who offered their heads who therein became the five beloved ones. Completely unprecedented, the Guru then knelt before the five beloved ones asking them for the gift of Amrit. Guruji was asked ‘we offered our heads for this Amrit; what will you give’. Guru ji proclaimed that they would give everything and time bore witness to this. Guru Ji’s love and respect for the true Khalsa was extraordinary and can be experienced through Guru Ji’s poetry which brims with reverence and affection. Upon hearing of the martyrdom of their four sons in the fight for truth against the tyrannical rule of the Mughals, Guruji proclaimed ‘why to grieve if four are lost; many thousands live on’ highlighting Guruji’s love for the Khalsa as no less than that for his children.

The word “Khalsa” is derived from Arabic khalis (literally meaning “pure” or “unsullied”) and Perso-Arabic khalisah and is used collectively for the community of initiated Sikhs. Khalsa commit to a life of purity, excellence, truth, courage and service. Immense importance was and is placed on the concept of equality, regardless of caste, race, gender…all are equal. This is integral to the Amrit ceremony where the concept was crystallised. All ablakhees (those presenting themselves for Amrit) acquire a royal identity becoming part of the one Khalsa panth (brother / sisterhood), regardless of social status or background, upon acquiring the blessing of Amrit. Crucially, the ceremony requires the ablakhee’s complete surrender to God and Guru, a commitment to live a life according to a code of conduct set out by Guru ji, not one determined by the individual ego.

The purpose of the Khalsa as defined by Sri Guru Gobind Singh ji who established the order of Sant Sipahi (Saintly warriors) was to act as “the army of God” to guard and protect everyone (not just Sikhs) and who always act according to their Gurus’ teachings, rules and ethics, acting at all times with charity, love and service to all human beings. This brings unprecedented responsibilities and duties that need to be fulfilled by the Khalsa. As Akal Purakh’s fauj or “God’s army” as the Khalsa is referred to, the duty of the Khalsa is to serve the Almighty and the entire people of the world. This concept is all encompassing and cannot be used in a narrow sense to refer to the duties of the Khalsa to a small sect or elite group of men/women who share similar beliefs; the Khalsa’s role is to serve the wider world community.

The word “Khalsa” appears in the Sri Guru Granth Sahib, the eleventh and eternal Guru of the Sikhs. It is mentioned in the bani of Bhagat Kabir:

Vaisakhi falls in the Nanakshahi calendar on the first day of Vaisakh month and marks the sun’s entering Mesha Rasi (this fact is called Mesha Sankranti, i.e. the solar transit into Aries). Vaisakhi is therefore determined by the solar calendar. Vaisakhi usually falls on April 14, and on April 15 once every thirty-six years, however it has now been agreed for Vaisakhi to always fall on the 14th of April. It is not, as is commonly believed, a New Year for the Sikhs. This Sikh New Year is celebrated on the 1st day of Chet which usually falls on March 14, a month earlier.

Here are a few pictures of the Bradford Vaisakhi Nagar Kirtan. It started and finished at Gurdwara Singh Sabha this year with many hundreds taking part. Good weather, uplifting Sangat and great energy – a wonderful day! 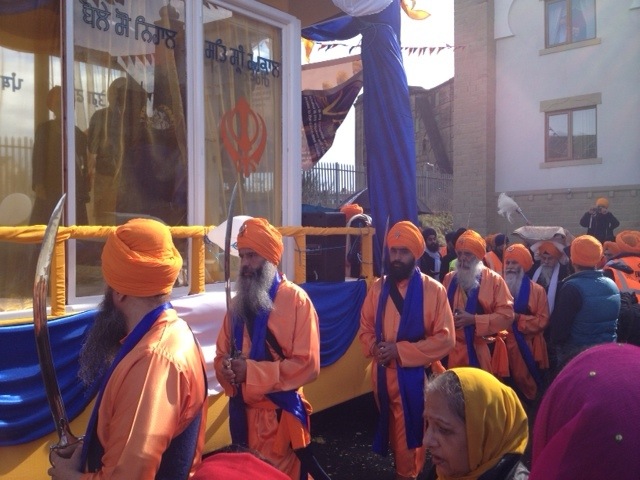 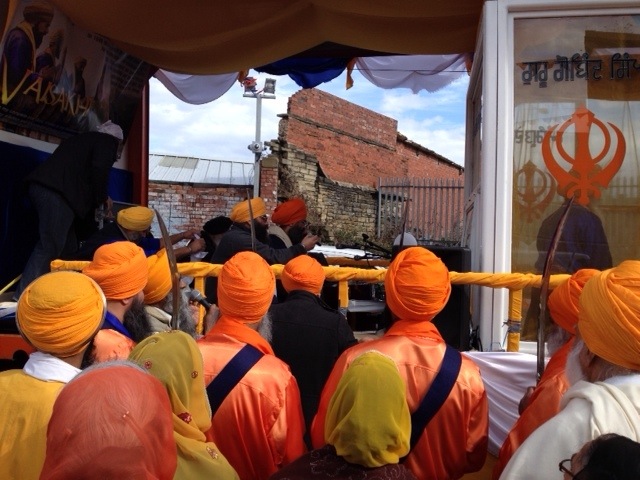 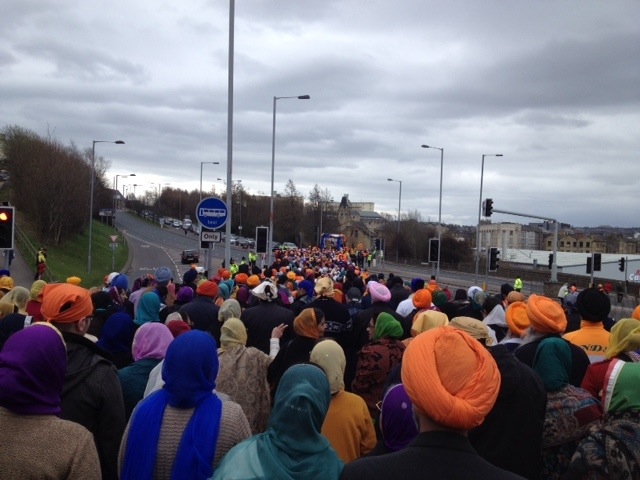 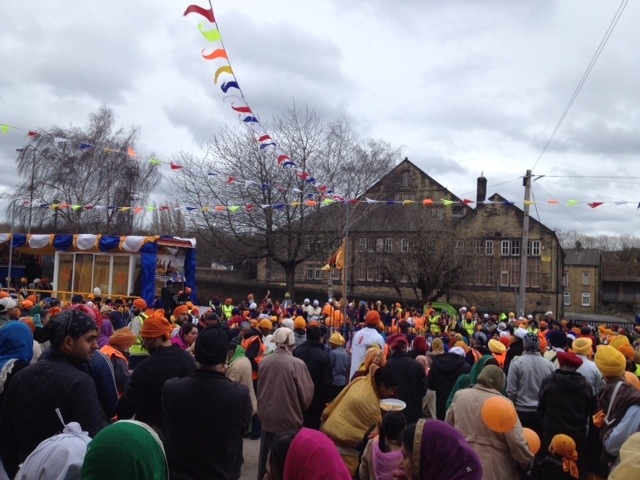