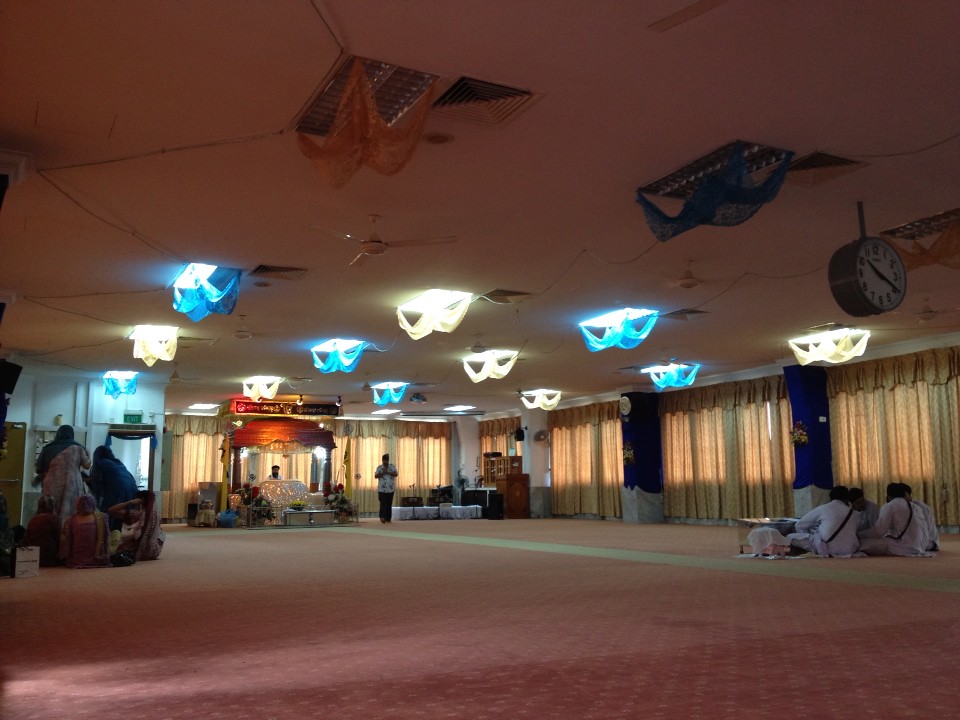 This morning we visited Gurdwara Sri Guru Singh Sabha on Wilkie Road to listen to Kirtan and then the start of the Akhand Paath.

Afterwards Sangeet stayed at the Gurdwara whilst I popped to Sim Lim Square, just to have a browse. The electronic gadgets are fascinating and worth browsing. Whilst there I met a family from England who were debating whether to buy the iPad 2 or iPad Mini, I suggested that if they are going to the USA they should buy it from an Apple shop there. In my opinion Sim Lim Square is good for buying accessories. Expensive items such as cameras sometimes only come with a local warranty. So please check before buying. As I was leaving Sim Lim Square I noticed a shop selling a rubber Bluetooth keyboard which would be perfect as the keyboard on the iPad sometimes gets a bit tiring to use. The cost was SGD$20, any other time I would have snapped up the bargain, as we have been traveling , every dollar does count!

I met Sangeet back at the Gurdwara.

As I wanted to show Sangeet Sim Lim Square we had a wander into town. Our last experience in Sim Lim Square in 2005 was not that brilliant. We were looking to buy a camera, sounds easy but in this case we just could not get the information we needed and all the deals seemed dodgy!

On the way we passed the art college: 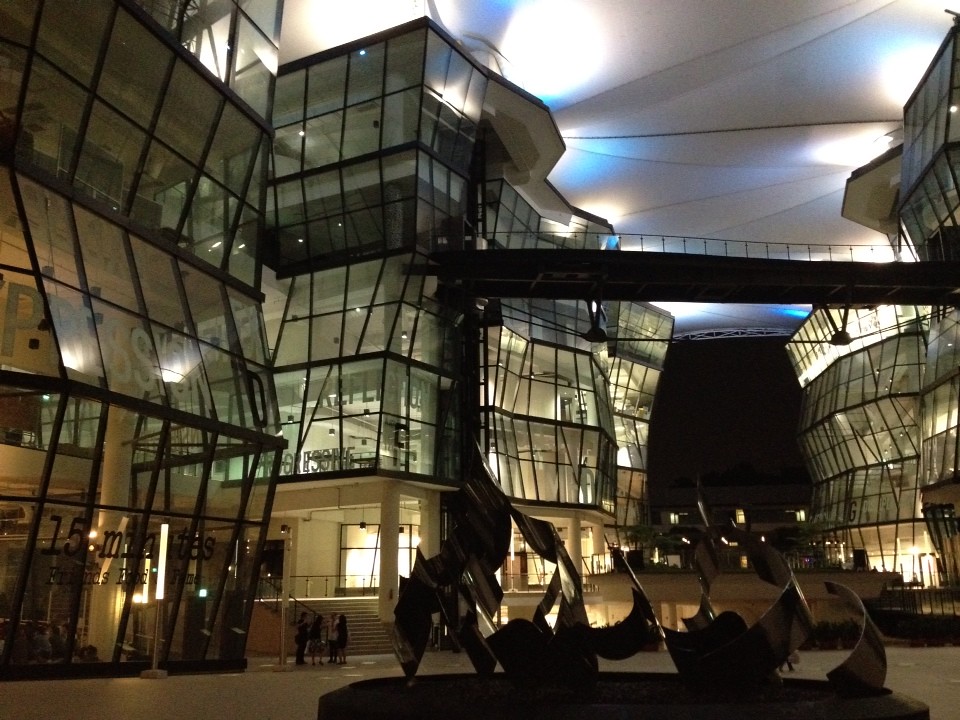 It looked amazing all lit up at night.

After passing Sim Lim Square we went to Bugis Street 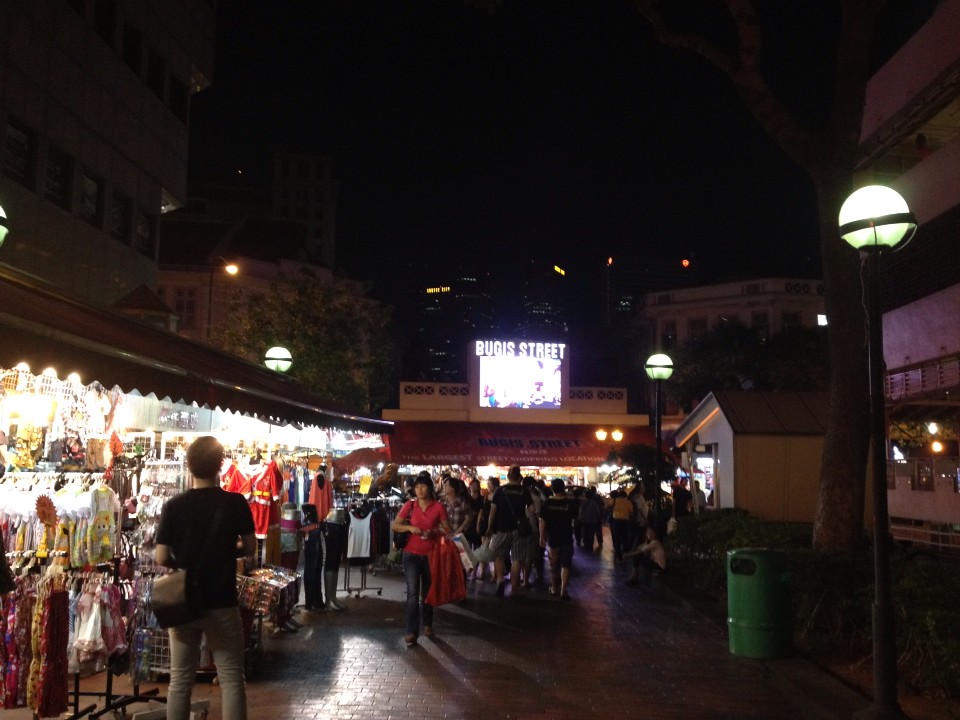 Bugis, in the city-state of Singapore, was renowned internationally from the 1950s to the 1980s for its nightly gathering of trans women, a phenomenon which made it one of Singapore’s top tourist destinations during that period.
In the mid-1980s, Bugis Street underwent major urban redevelopment into a retail complex of modern shopping malls, restaurants and nightspots mixed with regulated back-alley roadside vendors. Underground digging to construct the Bugis MRT station prior to that also caused the upheaval and termination of nightly transgender sex bazaar culture, marking the end of a colourful and unique era in Singapore’s history. This change helped improve Singapore’s international image as it began to be globally recognized.
Today, the original Bugis Street is now a cobblestoned, relatively wide avenue sandwiched between the buildings of the Bugis Junction shopping complex. On the other hand, the lane presently touted as “Bugis Street” by the Singapore Tourist Promotion Board is actually developed from New Bugis Street, and is billed as “the largest street-shopping location in Singapore”. An attempt by the Singapore Tourist Promotion Board to bring back the former glamor was unsuccessful. Although the street is not a well-known tourist destination, it is frequented by many Singaporeans.

A brand of clothing!! 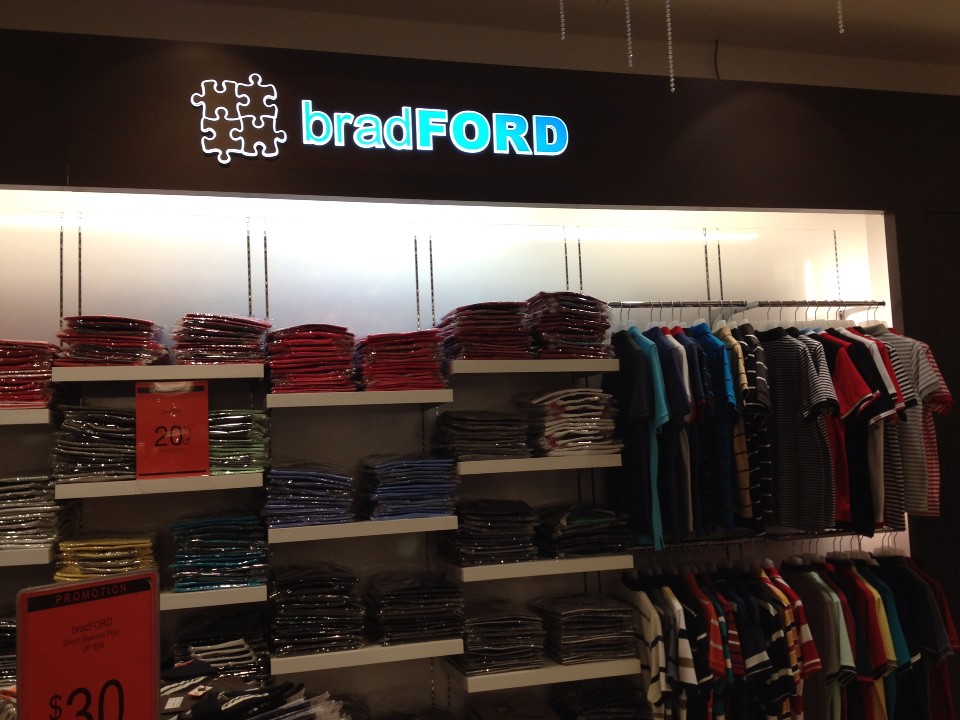 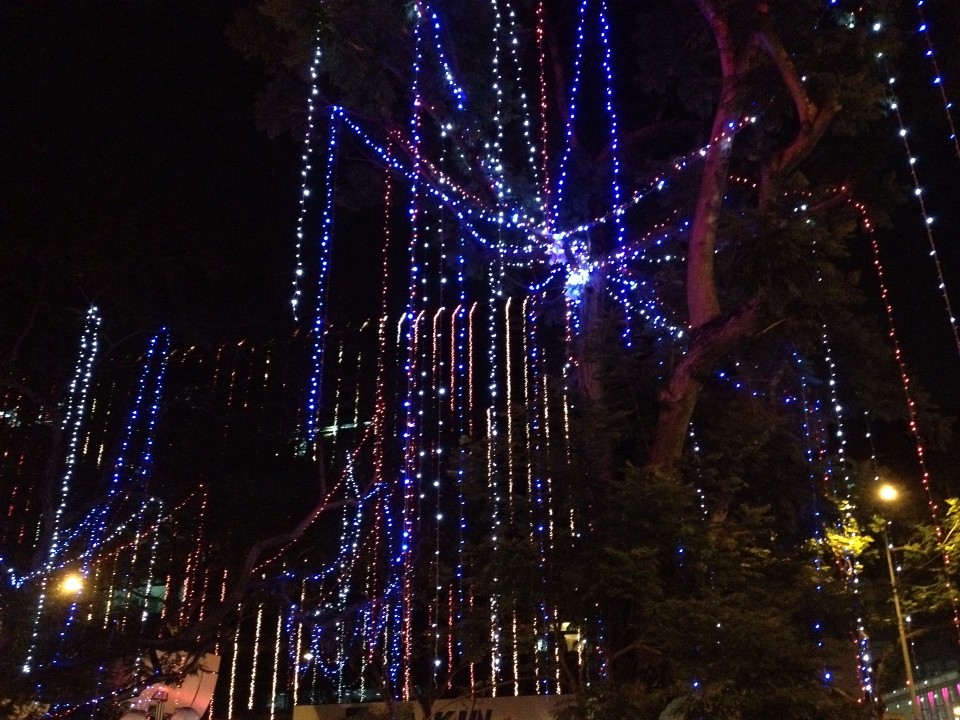 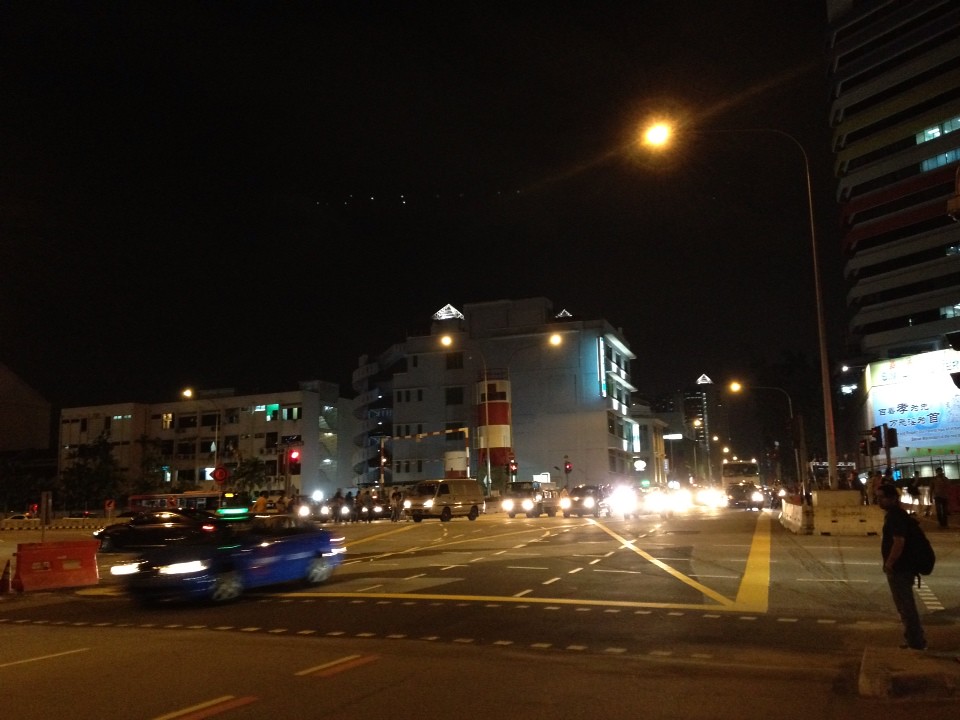 On the way back we passed a shop selling fruit 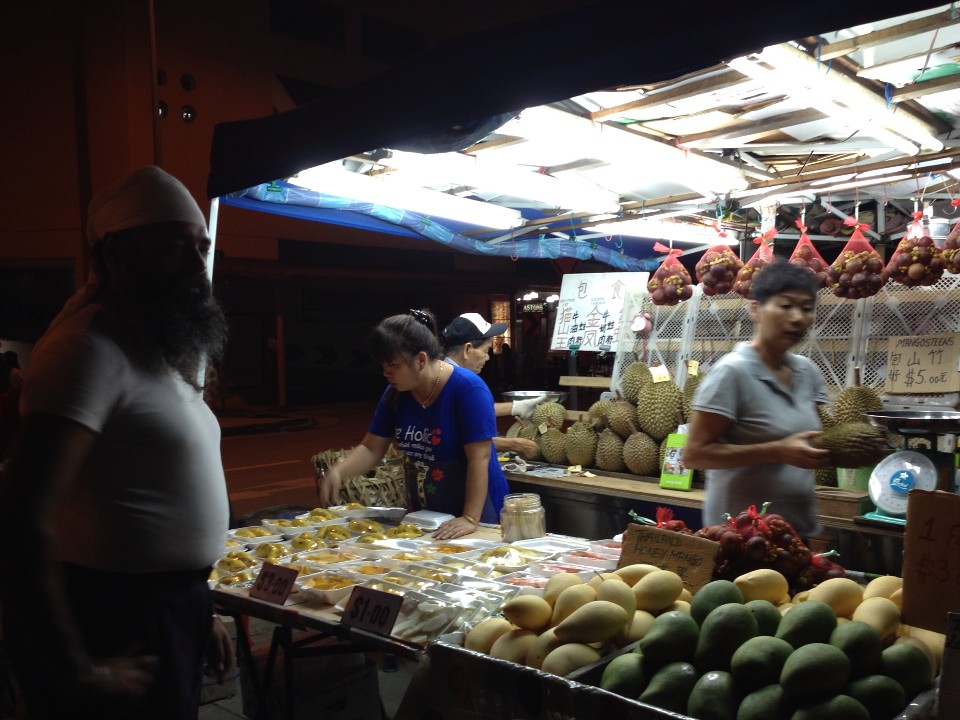 I bought some durian fruit 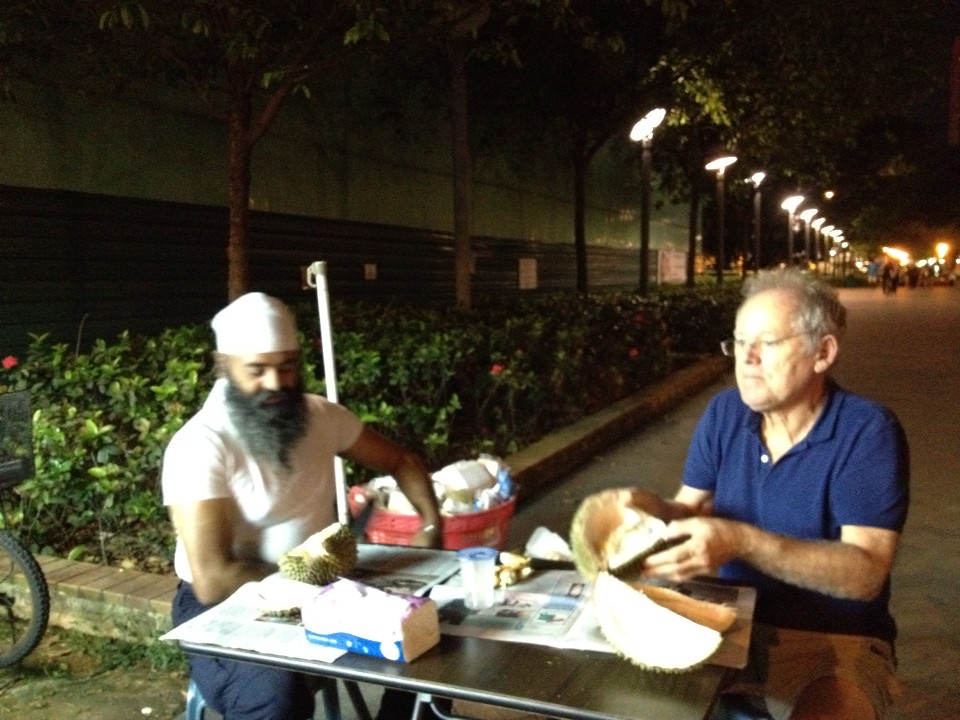 The durian is the fruit of several tree species belonging to the genus Durio and the Malvaceae family (although some taxonomists place Durio in a distinct family, Durionaceae.
Regarded by many people in southeast Asia as the “king of fruits”, the durian is distinctive for its large size, stomach-churning odour, and formidable thorn-covered husk. The fruit can grow as large as 30 centimetres (12 in) long and 15 centimetres (6 in) in diameter, and it typically weighs one to three kilograms (2 to 7 lb). Its shape ranges from oblong to round, the colour of its husk green to brown, and its flesh pale yellow to red, depending on the species.
The edible flesh emits a distinctive odour, that is strong and penetrating even when the husk is intact. Some people regard the durian as pleasantly fragrant; others find the aroma overpowering and revolting. The smell evokes reactions from deep appreciation to intense disgust, and has been described variously as almonds, rotten onions, turpentine, and gym socks. The odour has led to the fruit’s banishment from certain hotels and public transportation in southeast Asia.
The durian, native to Brunei, Indonesia and Malaysia, has been known to the Western world for about 600 years. The nineteenth-century British naturalist Alfred Russel Wallace famously described its flesh as “a rich custard highly flavoured with almonds”. The flesh can be consumed at various stages of ripeness, and it is used to flavour a wide variety of savoury and sweet edibles in Southeast Asian cuisines. When cooked, the seeds also can be eaten.
There are 30 recognised Durio species, at least nine of which produce edible fruit. Durio zibethinus is the only species available in the international market: other species are sold in their local regions. There are hundreds of durian cultivars; many consumers express preferences for specific cultivars, which fetch higher prices in the market.

Just to prove I did eat it! Sangeet could barely cope with the smell as we chatted to an Australian chap from Sydney who is married to a Singaporean. He gave us some useful information on Durian and how to pick a good one. 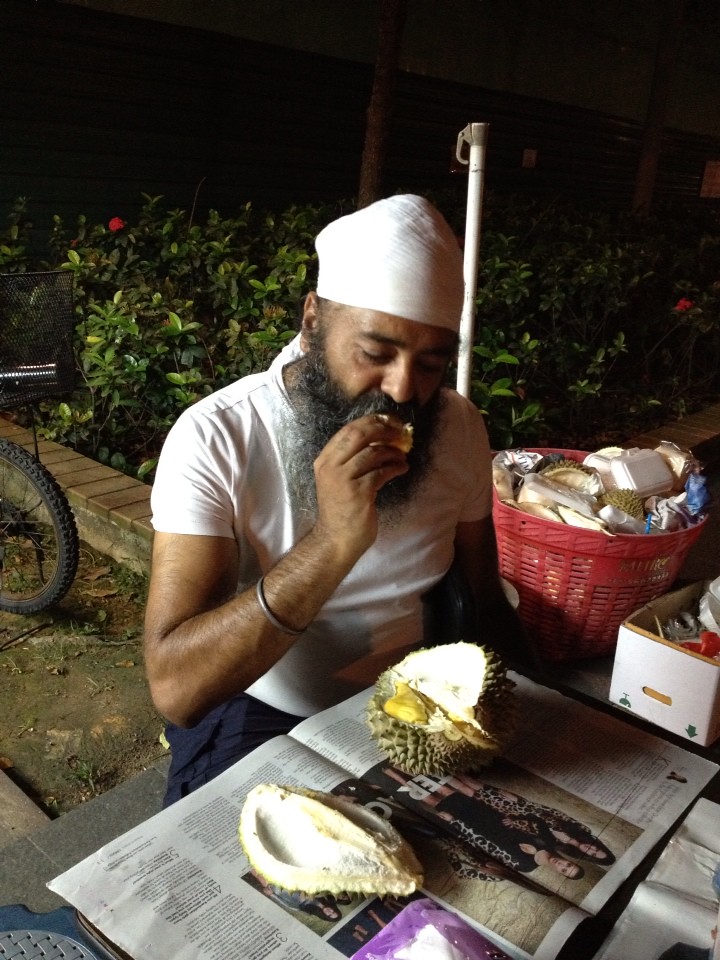 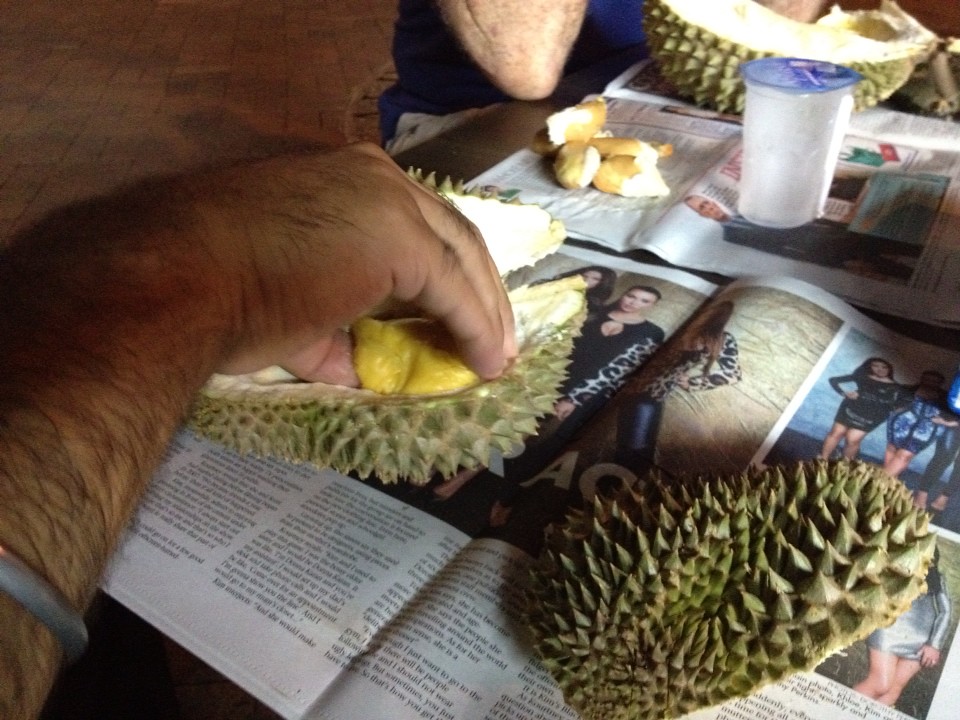 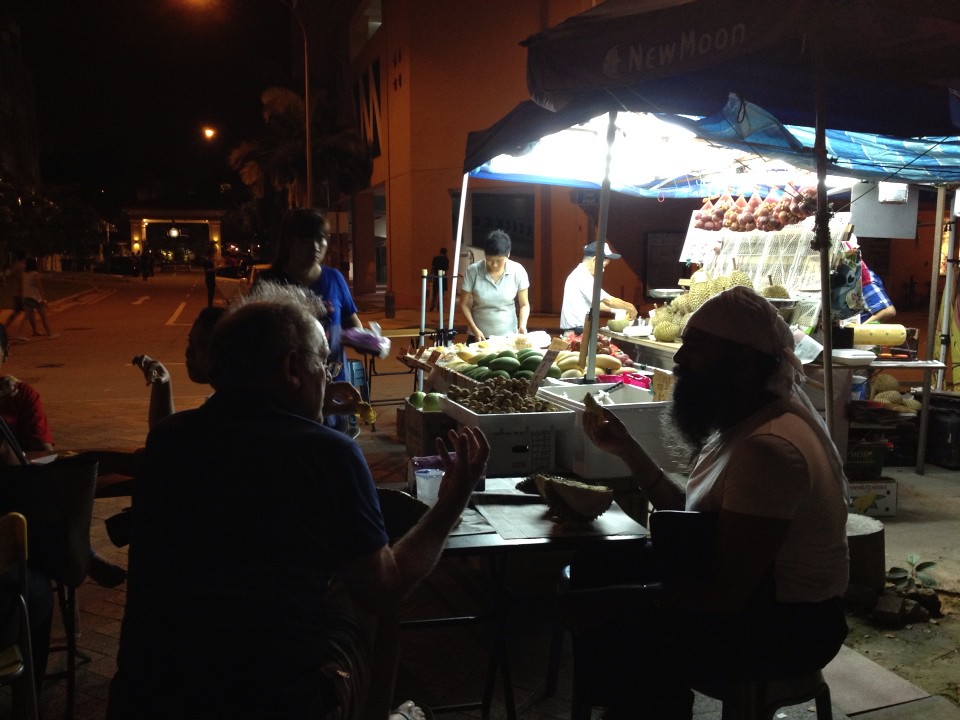 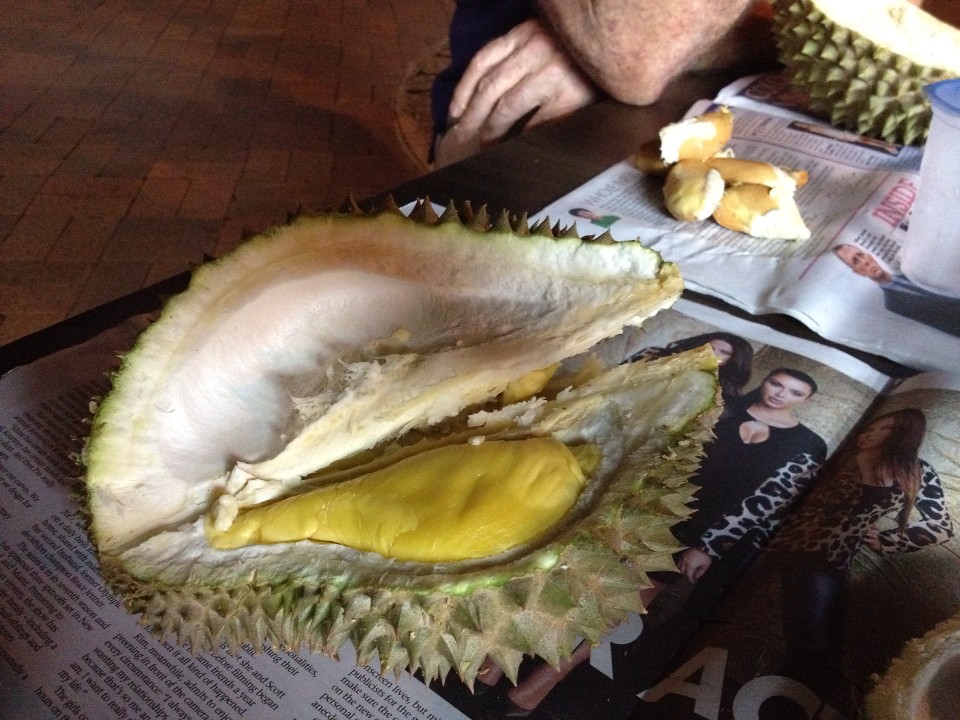