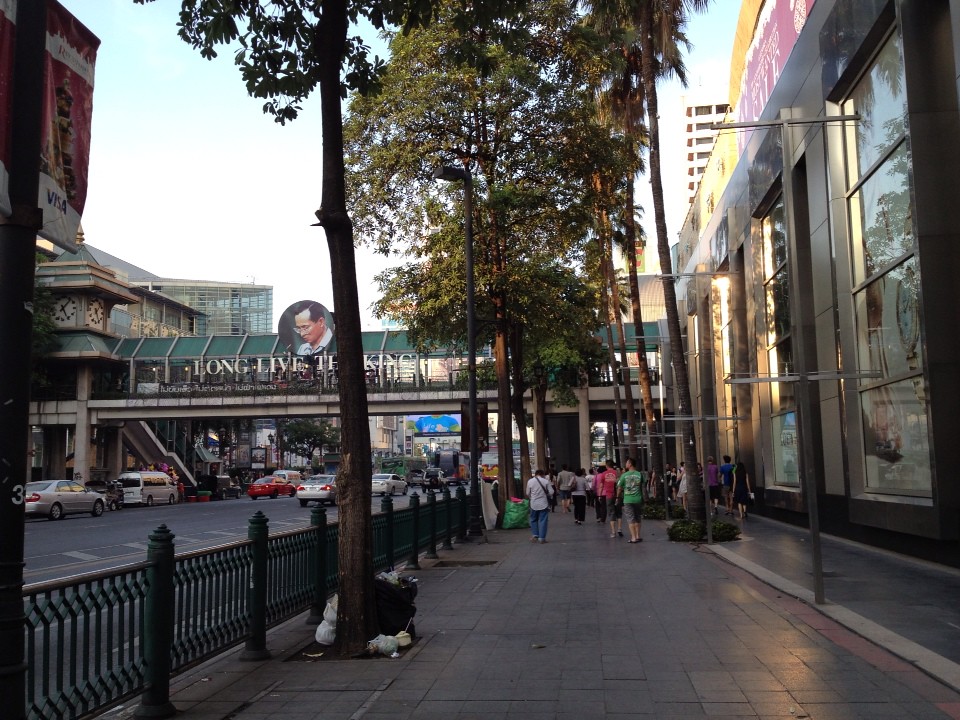 This morning I had a very informative breakfast…..in the lounge there was only the waitress and myself so we got chatting, I asked her what the Thai’s think of Indian’s. She said “they are very rude and obnoxious people also they are very dirty and leave the area a mess”. Seems like the Indians are not liked! Now it makes sense why taxi drivers did not want to pick us up. She has, in my opinion got a valid point.

Afterwards, it was time to find a laundry. Now in England most businesses are closed on January 1st. For some reason I was expecting it to be open here! I searched for a couple of hours, whilst Sangeet was relaxing at the hotel. I could not find any open, looks like it is back to hand washing the clothes.

Bangkok is not a city I enjoy. In fact I hate this place, I cannot put a finger on why I hate it so much, just has not got a good vibe.

Back at the hotel, Sangeet needed to get some contact lenses. We walked to one of the many malls in Bangkok called MBK, the walk took about an hour. MBK Center, also known as Mahboonkrong, is a large shopping mall in Bangkok, Thailand. At eight stories high, the center contains around 2,000 shops, restaurants and service outlets, including the 4-story Tokyu department store.
The MBK Center management reports daily visitor numbers of more than 100,000, half of whom are young Thai people and a third foreign visitors.
The MBK Center is popular with tourists, although the majority of shoppers are Bangkok residents. Knockoff items can be found in abundance at this shopping complex, but prices are much higher than one would expect. Many stores selling authentic merchandise are also available. MBK Center is connected to the Siam Discovery and Siam Paragon shopping mall by elevated walkways, both of which are more upscale and have only authentic goods.

Walking towards the mall

Another one of the many malls 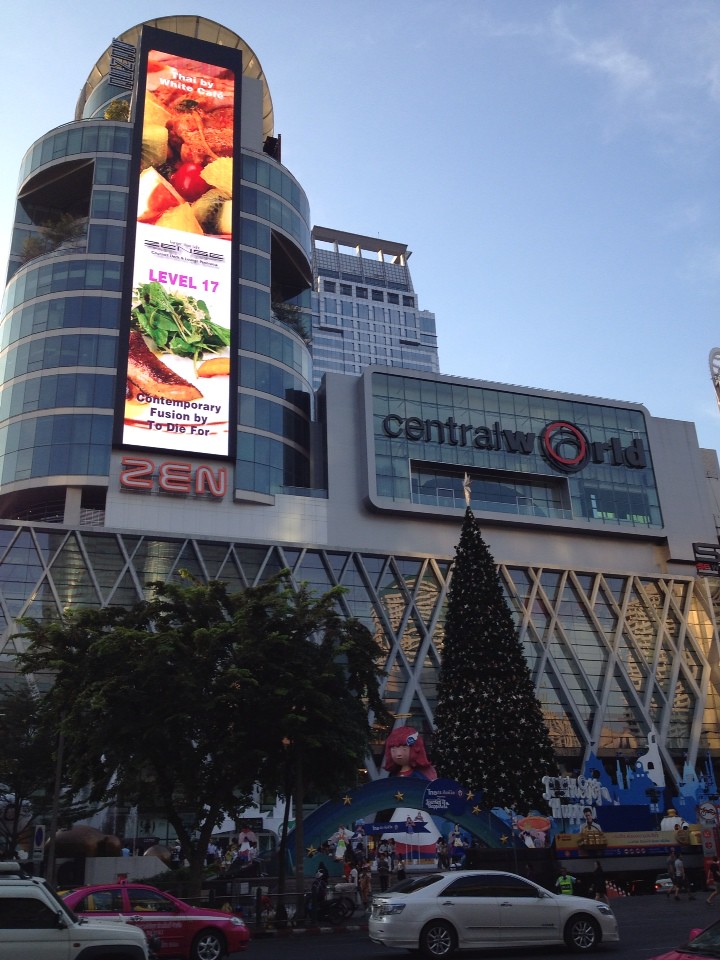 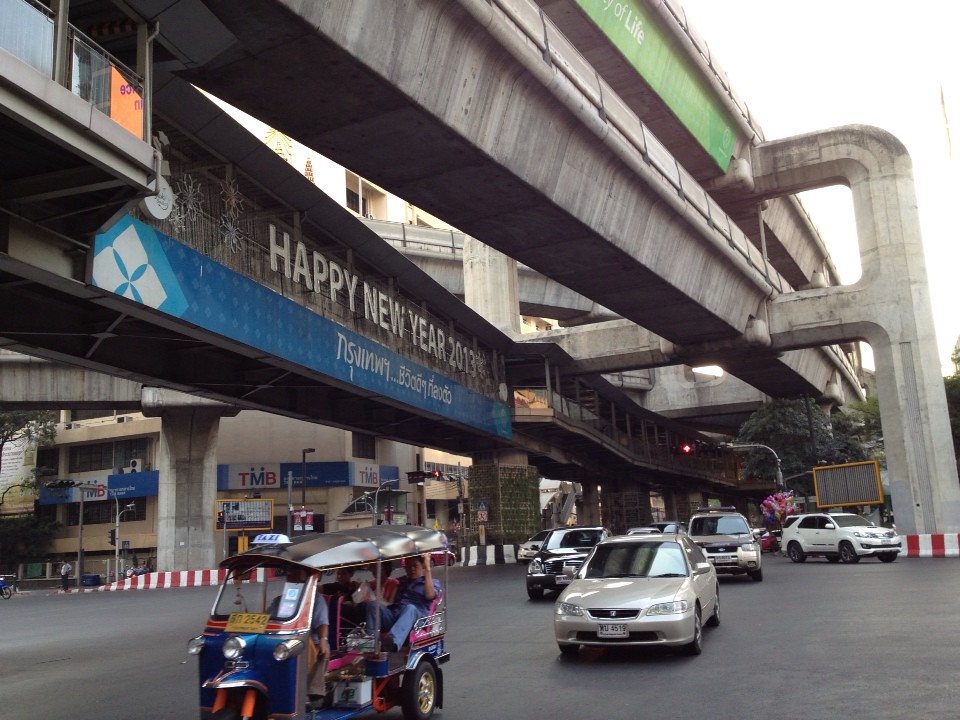 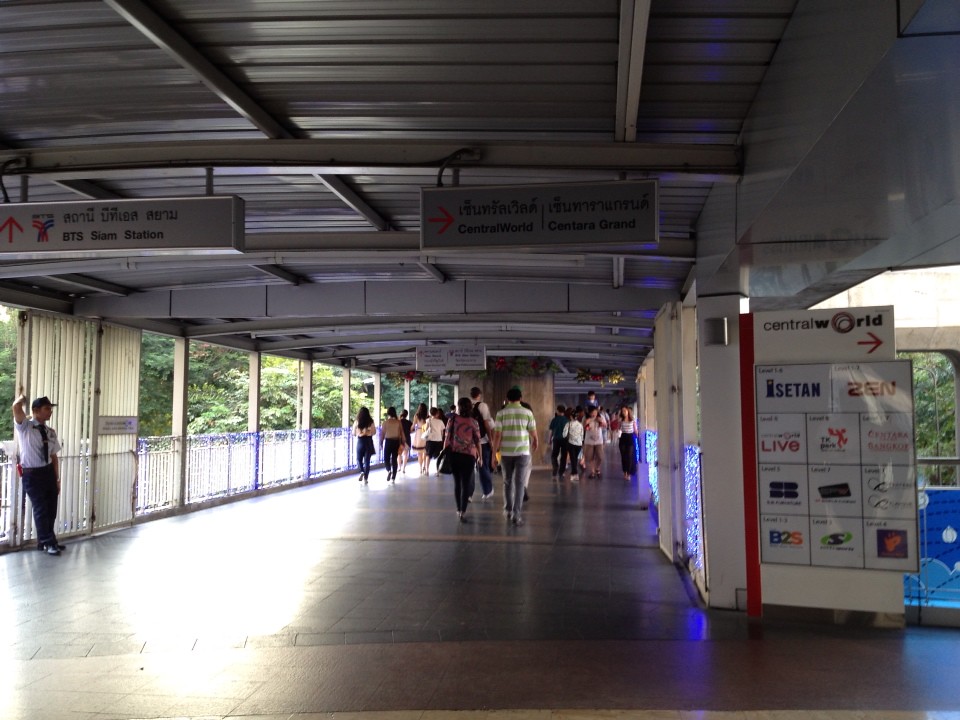 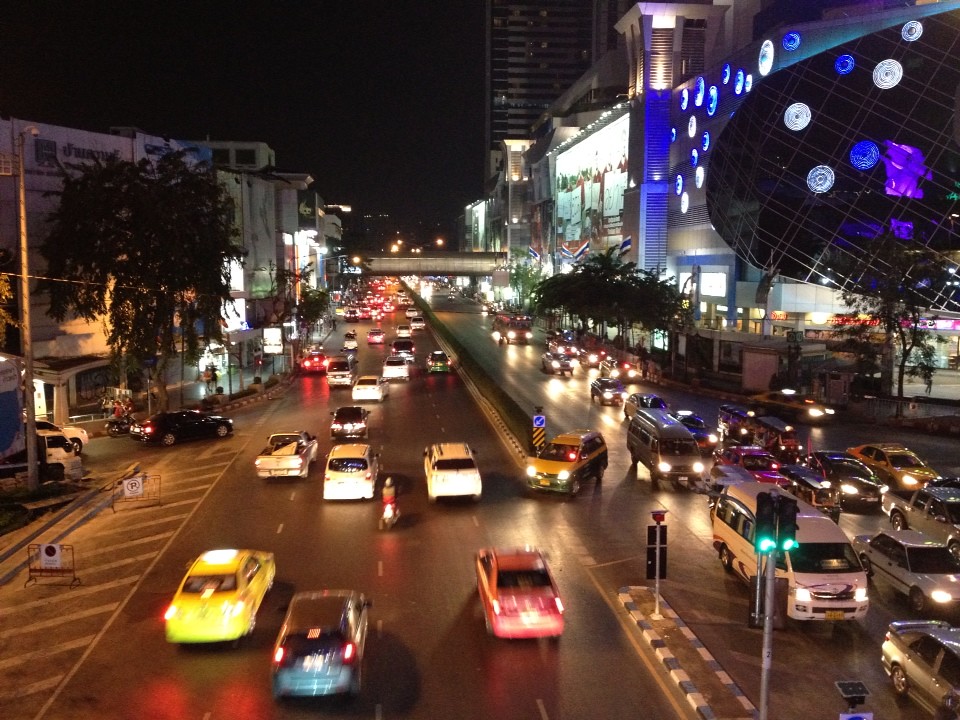 The skywalk is an elevated footpath or walkway which has been built under the skytrain in the areas where many of the shopping malls are close together. The Skywalk means it is very easy to walk from Central Chidlom to MBK without having to step foot on the regular pavement / sidewalk.

The Bangkok Skywalk doesn’t run the length of the Skytrain system but it is being extended gradually. The skywalk is clean, even and wide which allows for many people to walk between malls without getting jammed up or bumping into each other.

It might seem strange, but the Bangkok Skywalk has opening hours:

06:00 – 24:00
These times coincide with the times of the BTS Skytrain opening hours. The other reason for an opening and closing time is to stop homeless people using it at night as a place of shelter. In fact, you will see no beggars, homeless people or hawkers on the Skywalk system. It is kept clean of all people except those walking from one place to the next. It is also a very clean area and kept spotless. It’s a sign of what Bangkok can achieve when it wants to.

Bangkok’s streets are not for use by people wishing to walk on them. Legally they are, but the law isn’t really concerned about that and so at any given time the sidewalks are occupied by motorbikes either parked or being driven, hawkers selling anything at all and food stalls / noodle shops.
Bangkok’s streets are a mess. Just take a walk along Silom road or convent road and you will soon realise that it’s faster to walk on the road than to walk on the pavements. It’s also safer.

It’s unlikely you’d wear high heels if shopping, but you’d almost certainly break your ankle if trying to walk on Bangkok’s normal sidewalks in high heels as they are the worst sidewalks of any developed city. There are holes, uneven slabs and any number of obstacles which making walking a trial.

The Skywalk is not the same. It is flat, even and very easy and comfortable to walk on, but the Skywalk doesn’t go everywhere and there might be times when you’ll have to venture onto Bangkok’s regular sidewalks.

How Far Does The Skywalk Go?

Other sections are being added and most department stores down the Sukhumvit road are being joined to the Skywalk or BTS Stations. However, there could come a time when the skywalk extends all the way down Sukhumvit road and this would be a very good idea.

The Bangkok Skywalk Rises Above The Fumes & The Traffic,. Stretching Off Into The Distance

For some reason, perhaps because of the pollution, heat and humidity, Bangkok just tires us out! 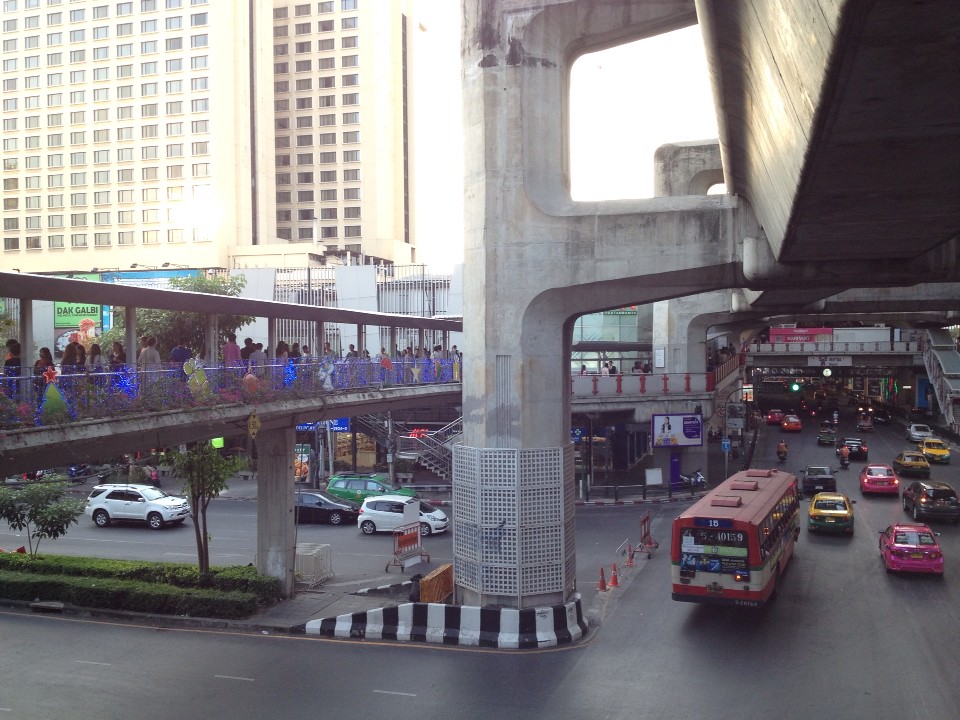 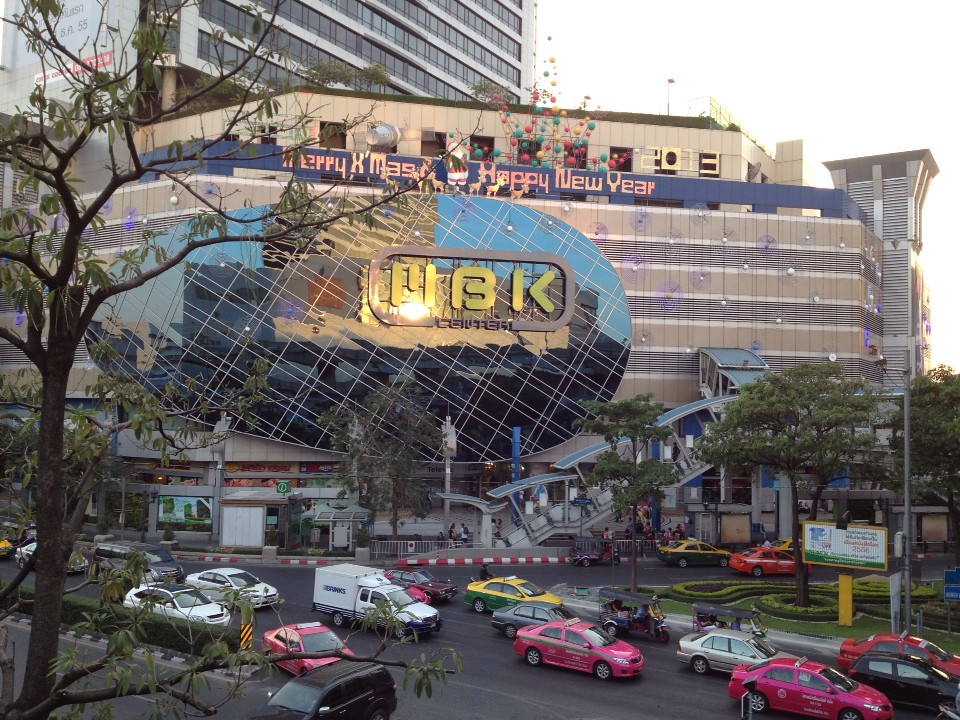 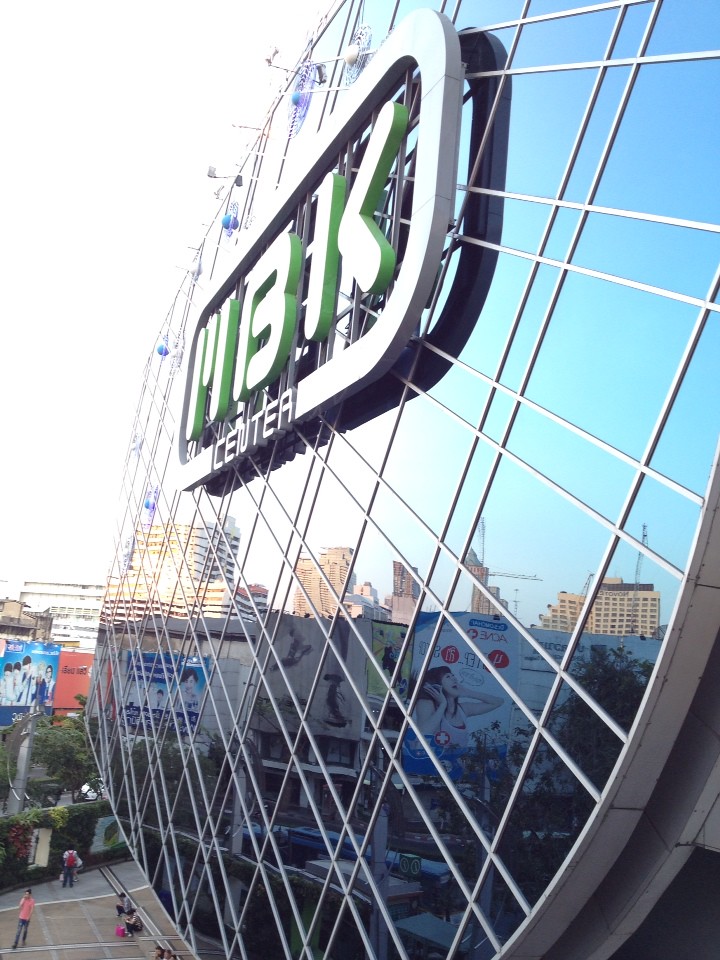 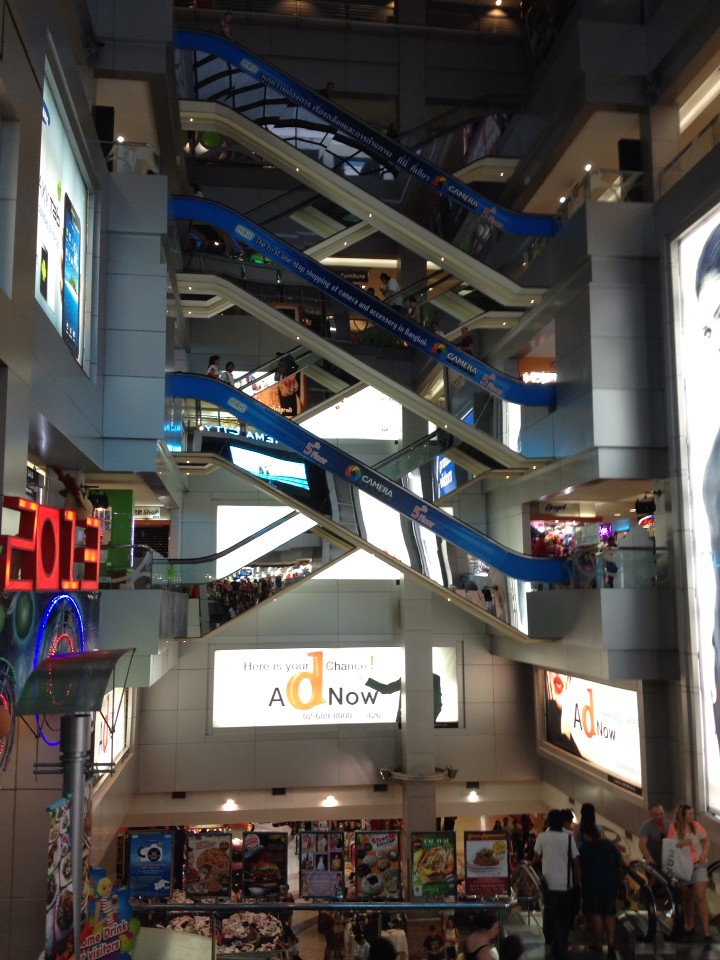 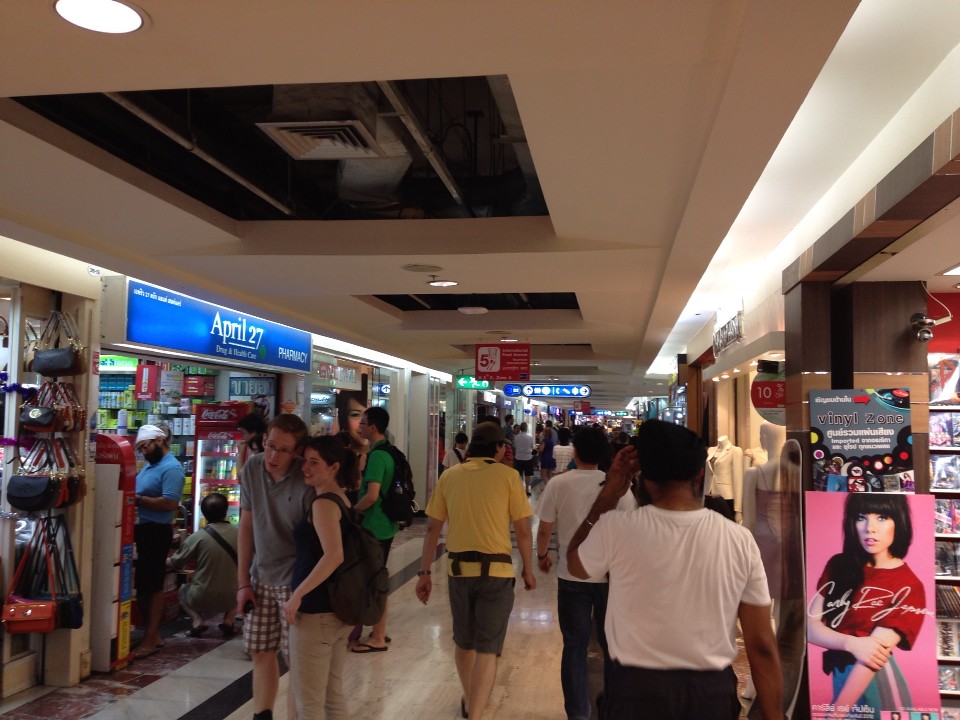 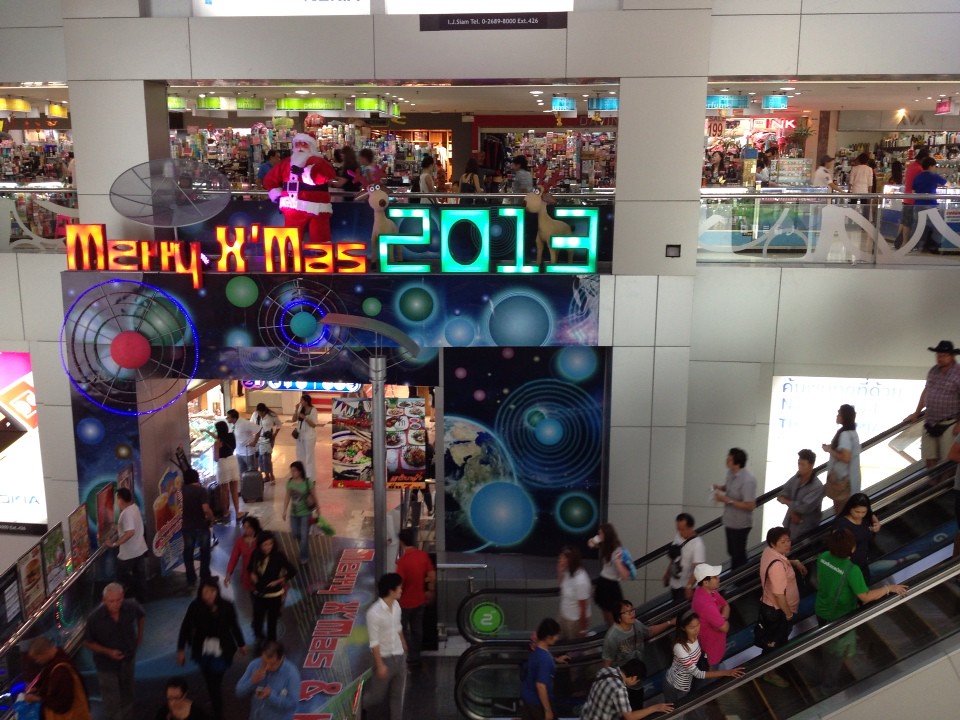 Sangeet bought the contact lenses, we then went to the fifth floor where Sangeet had dinner at 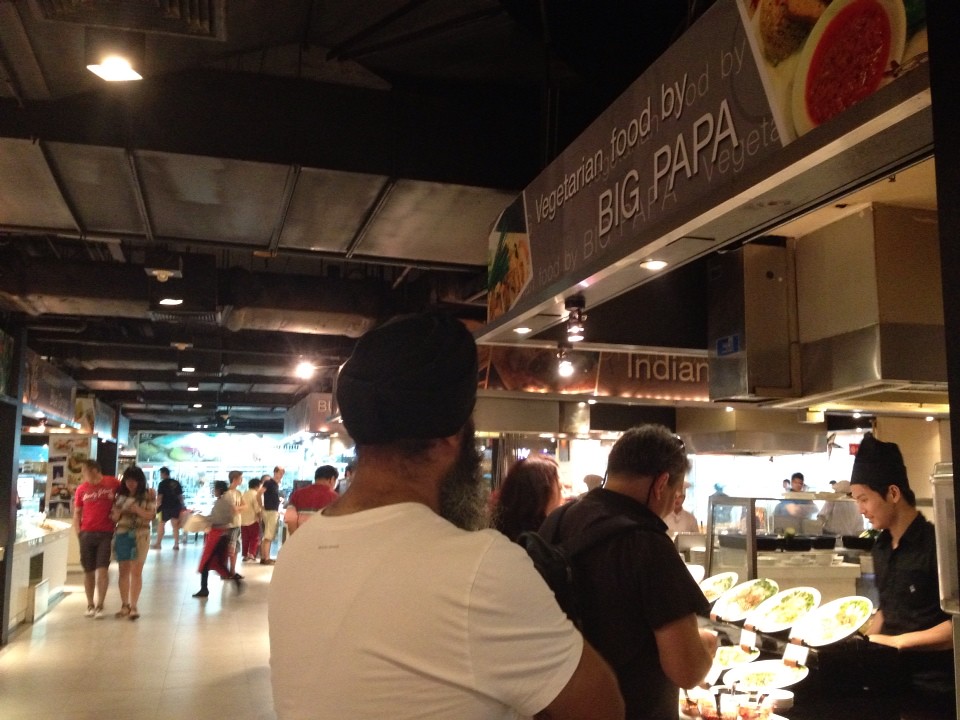 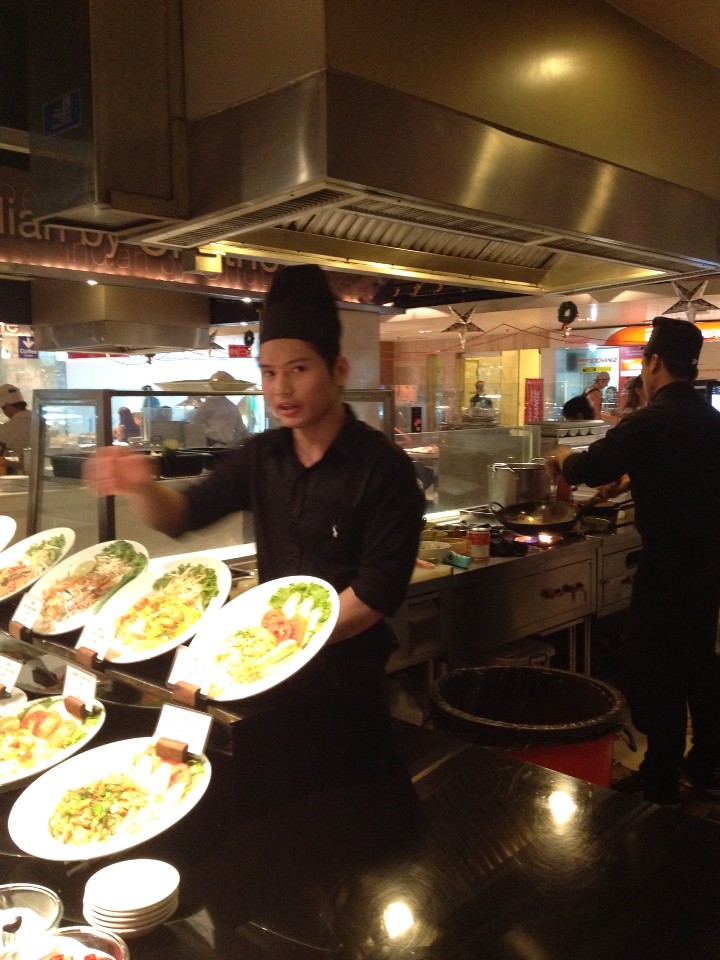 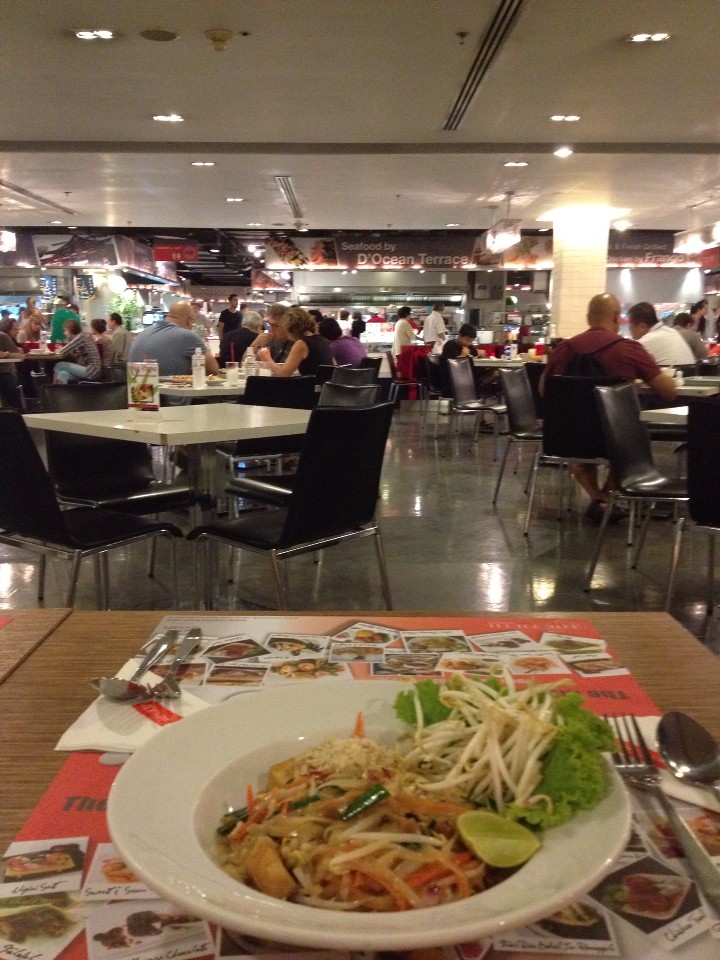 The food is fresh and made in front of you. I was still full from a big breakfast, well people do say eat breakfast like a king!

Fifth Food Avenue has a great variety of kiosks in a spacious setting, with chefs preparing the foods in open kitchens. Options include Arabic, Vietnamese, Hainese, Chinese, Japanese, Indian and Italian. There is also a vegetarian section with a good, all-natural, MSG-free menu, called the Tamarind Cafe.

Then there’s the ‘Signature Dessert’ bar, with the most exquisitely presented delicacies. The strawberry pavlova is sensational; two layers of meringue sandwiched with whipped cream, fresh strawberry and kiwi. And so too the trio of vanilla, caramel and dark chocolate creme brulee. This is a good place to have a filling meal in an appetizing environment.

MBK Food Centre on the sixth floor is much cheaper and the food on offer ranges from pre-packaged sushi sets, to deli-style salad and noodle outlets. Here you can either sit down for a quick bite or take home a neatly-wrapped item from the bakery, or something from the fruit or dessert stall. There is a dining area called ‘Kou Asian’ with an interesting menu, which includes vegetarian fare. It differs from Fifth Food Avenue in that it is right in the hustle and bustle of the main shopping area. 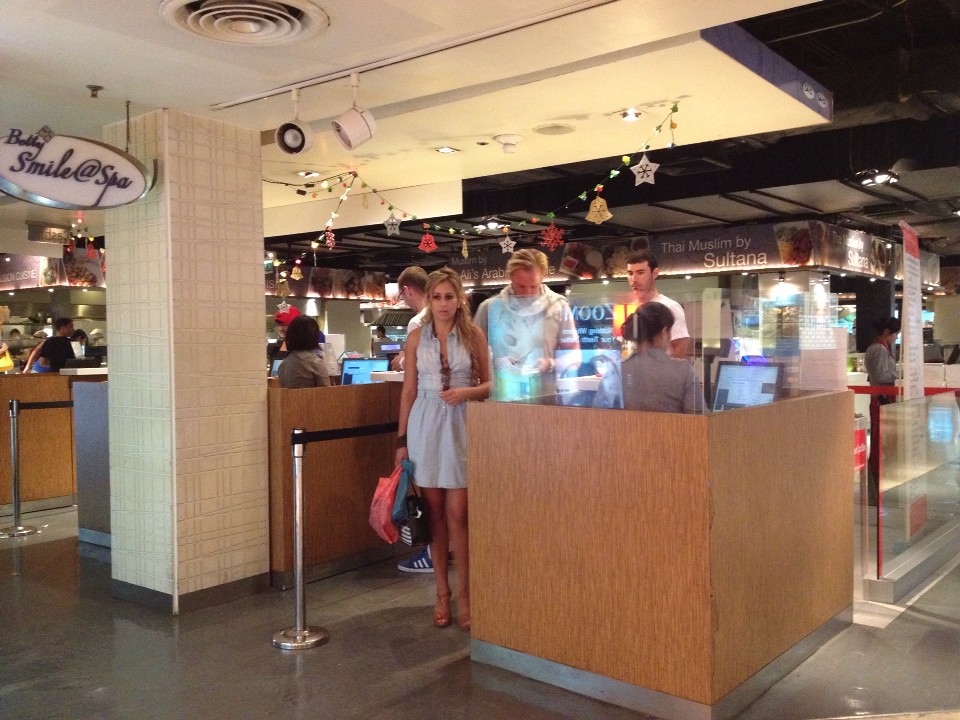 The mall is outside a sky train station, so we decided to take the sky train back to Wireless Road, where we walked to the hotel. 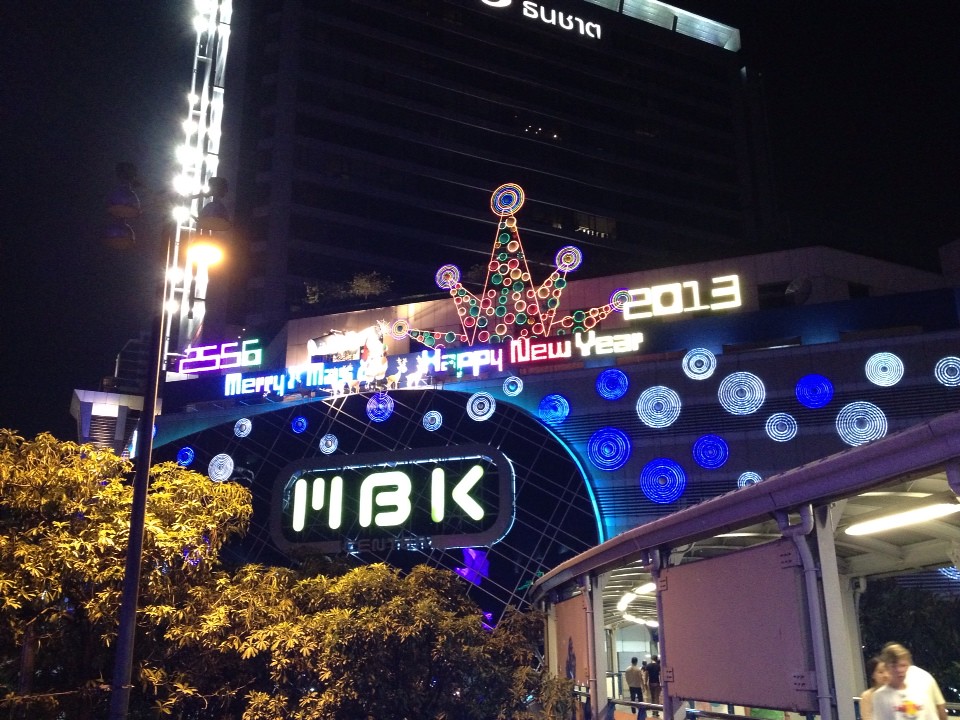 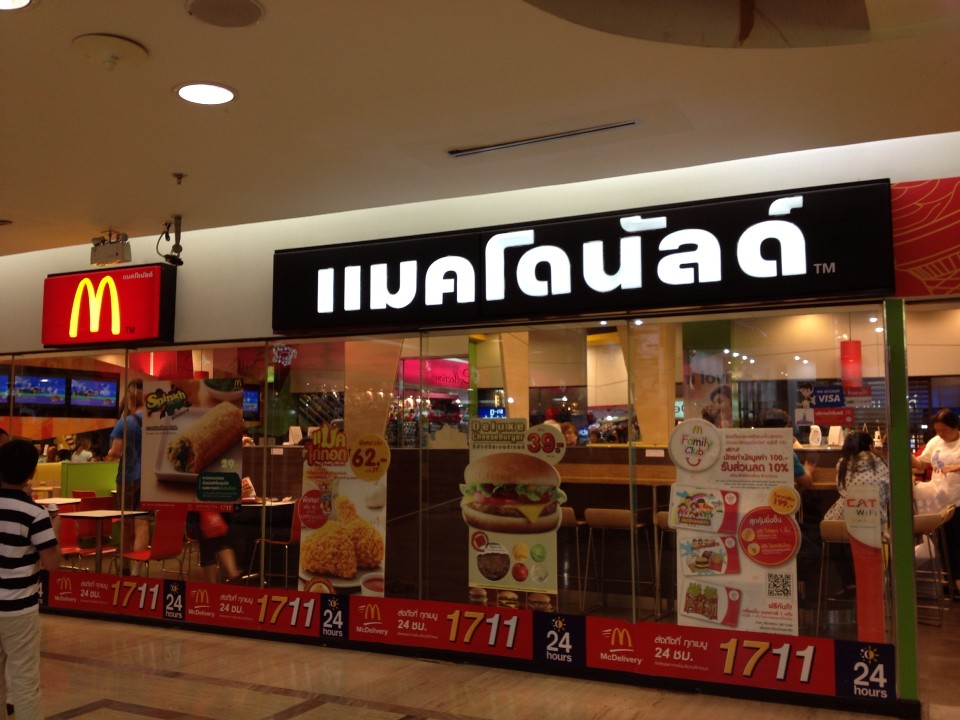 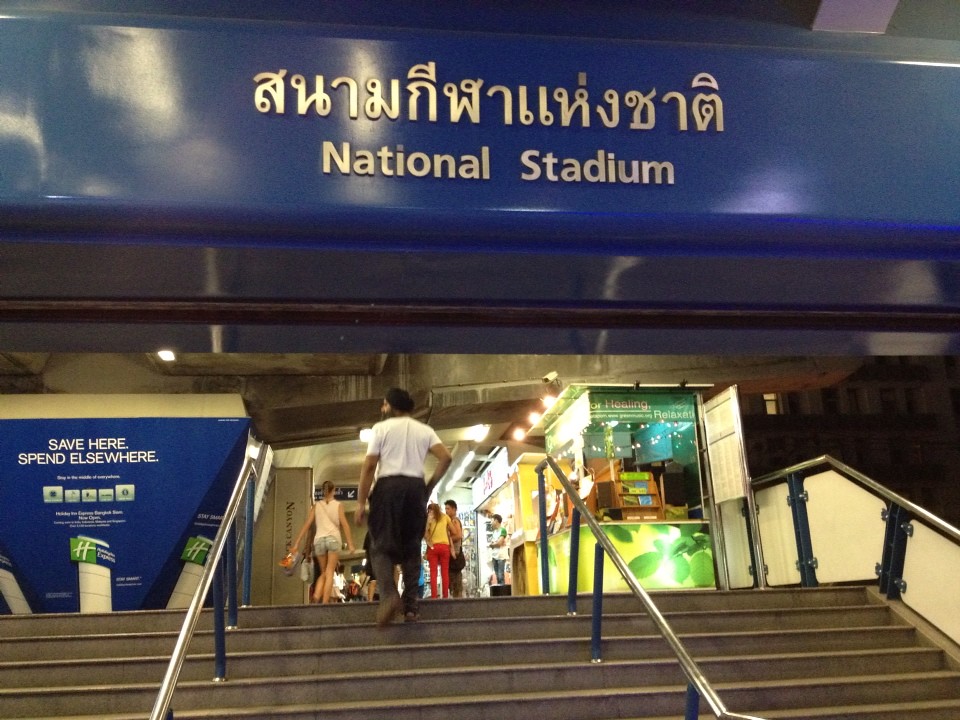 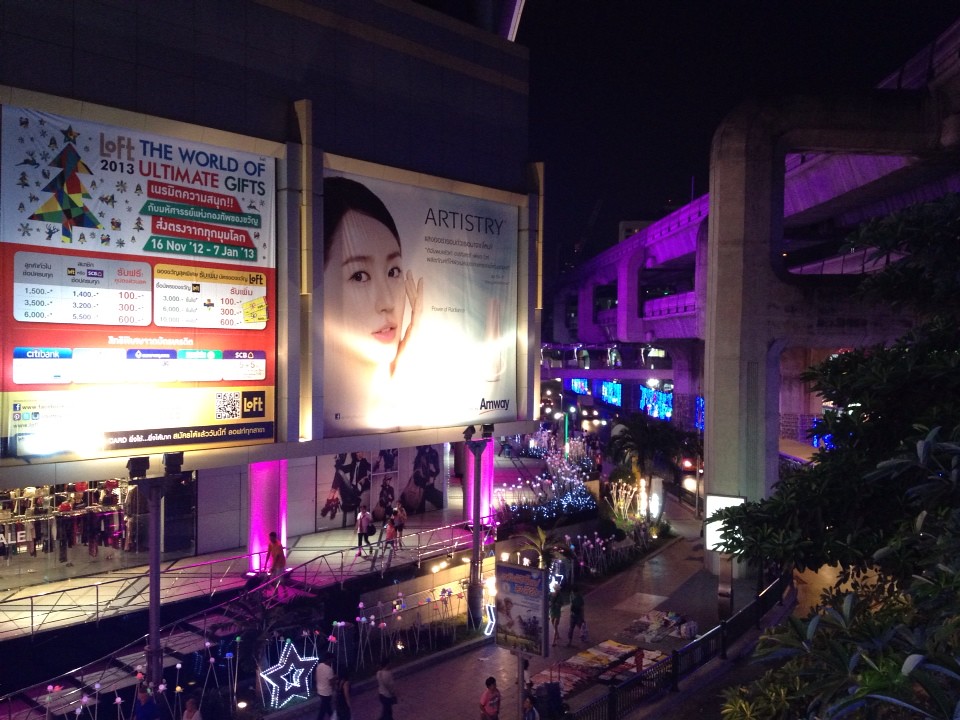 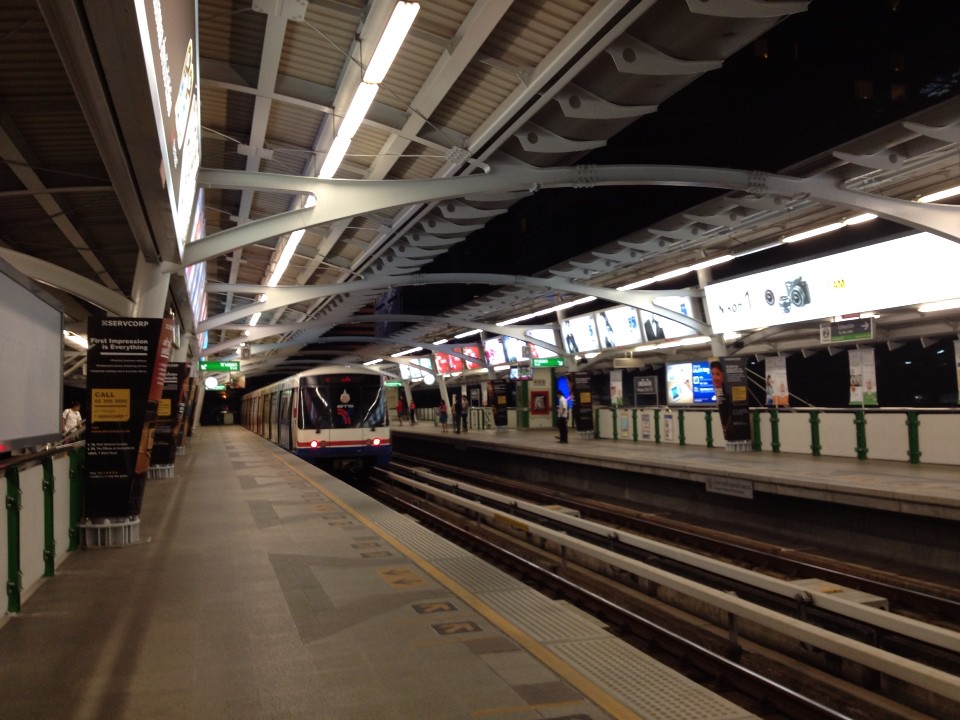 Bangkok is the capital city of Thailand and the most populous city in the country. It is known in Thai as Krung Thep Maha Nakhon or simply Krung Thep. The city occupies 1,568.7 square kilometres (605.7 sq mi) in the Chao Phraya River delta in Central Thailand, and has a population of over eight million, or 12.6 percent of the country’s population. Over fourteen million people (22.2 percent) live within the surrounding Bangkok Metropolitan Region, making Bangkok an extreme primate city, dwarfing Thailand’s other urban centres in terms of importance.
Bangkok traces its roots to a small trading post during the Ayutthaya Kingdom in the 15th century, which eventually grew in size and became the site of two capital cities: Thonburi in 1768 and Rattanakosin in 1782. Bangkok was at the heart of Siam’s (as Thailand used to be known) modernization during the later nineteenth century, as the country faced pressures from the West. The city was the centre stage of Thailand’s political struggles throughout the twentieth century, as the country abolished absolute monarchy and underwent numerous coups and uprisings. The city grew rapidly during the 1960s through the 1980s and now exerts a significant impact among Thailand’s politics, economy, education, media and modern society.
The Asian investment boom in the 1980s and 1990s led many multinational corporations to locate their regional headquarters in Bangkok. The city is now a major regional force in finance and business. It is an international hub for transport and health care, and is emerging as a regional centre for the arts, fashion and entertainment. The city’s vibrant street life and cultural landmarks, as well as its notorious red-light districts, have given it an exotic appeal. The historic Grand Palace and Buddhist temples including Wat Arun and Wat Pho stand in contrast with other tourist attractions such as the nightlife scenes of Khaosan Road and Patpong. Bangkok is among the world’s top tourist destinations. It is ranked third after London and Paris in MasterCard’s Global Destination Cities Index, and has been named “World’s Best City” for three consecutive years by Travel + Leisure magazine.
Bangkok’s rapid growth amidst little urban planning and regulation has resulted in a haphazard cityscape and inadequate infrastructure systems. Limited roads, despite an extensive expressway network, together with substantial private car usage, have resulted in chronic and crippling traffic congestion. This in turn caused severe air pollution in the 1990s. The city has since turned to public transport in an attempt to solve this major problem. Four rapid transit lines are now in operation, with more systems under construction or planned by the national government and the Bangkok Metropolitan Administration.