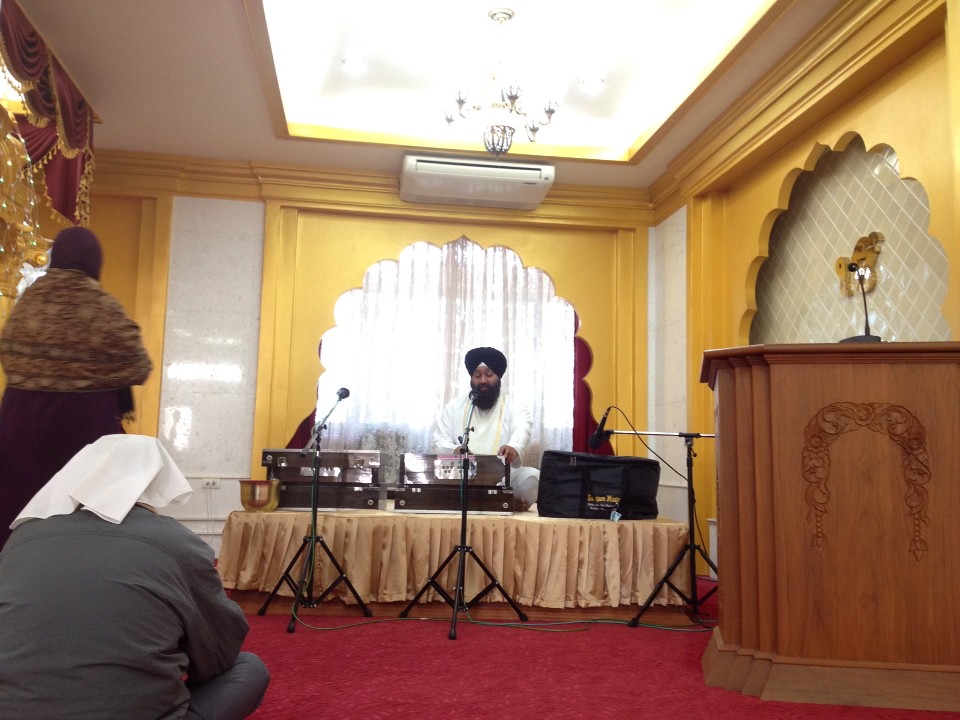 Here in Chiang Mae, they have the Gurdwara programme at 7:30am until 8:30am on a Saturday morning. Giani Charanjit Singh did Asa Di Vaar then kirtan, then Anand Sahib , Ardas and Guru ji’s hukam. Guru Ka Lungar consisted of Kadi with pakoras, Bhoga (spicy vegetables!), rice, mithay chawl and gulab jamun. Sangeet had so been yearning for some good Indian food, for me some of it was very chilli, I should have stuck to the non spicy dishes of which there were plenty! The president approached me and said there are some good Indian restaurants here, perhaps the Gianiji can take you! I was expecting him to say you should come over for dinner! Apart from the Gianiji the Sikhs here have not been very friendly. 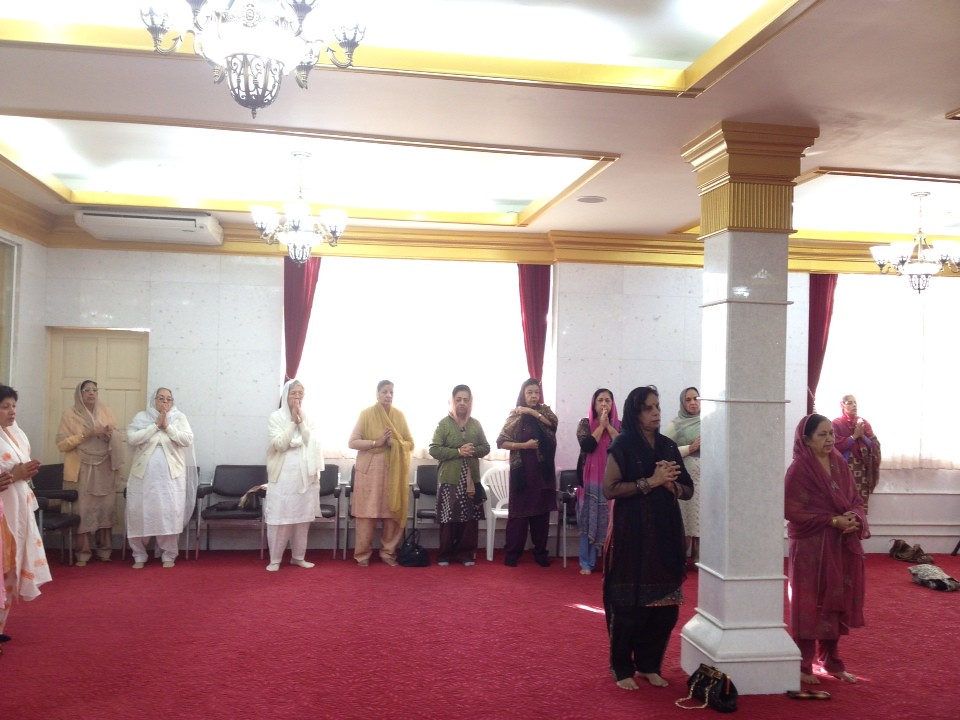 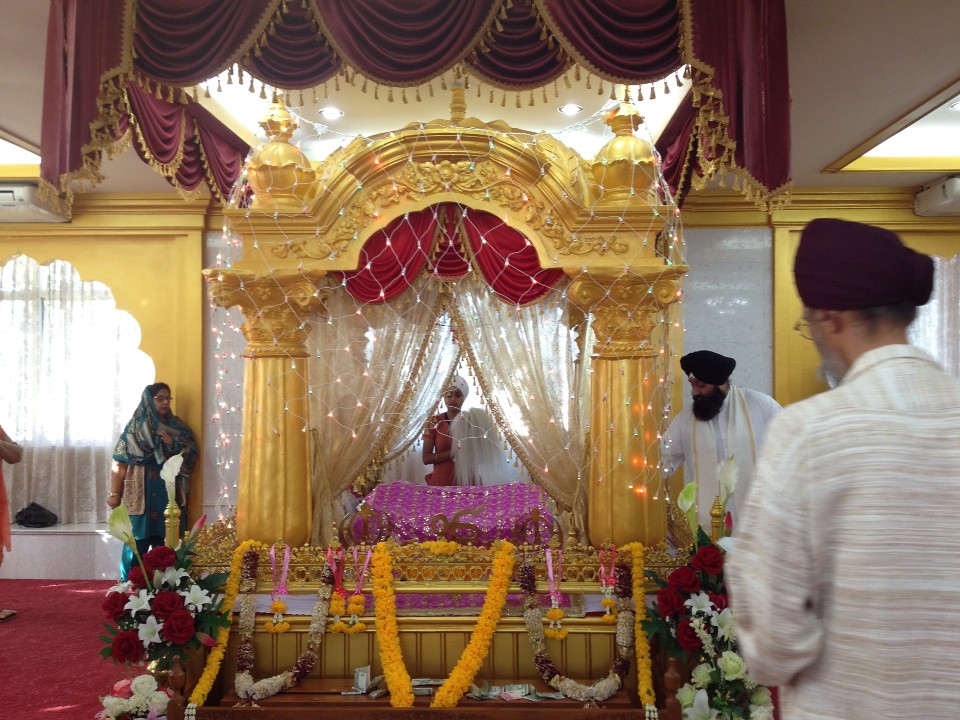 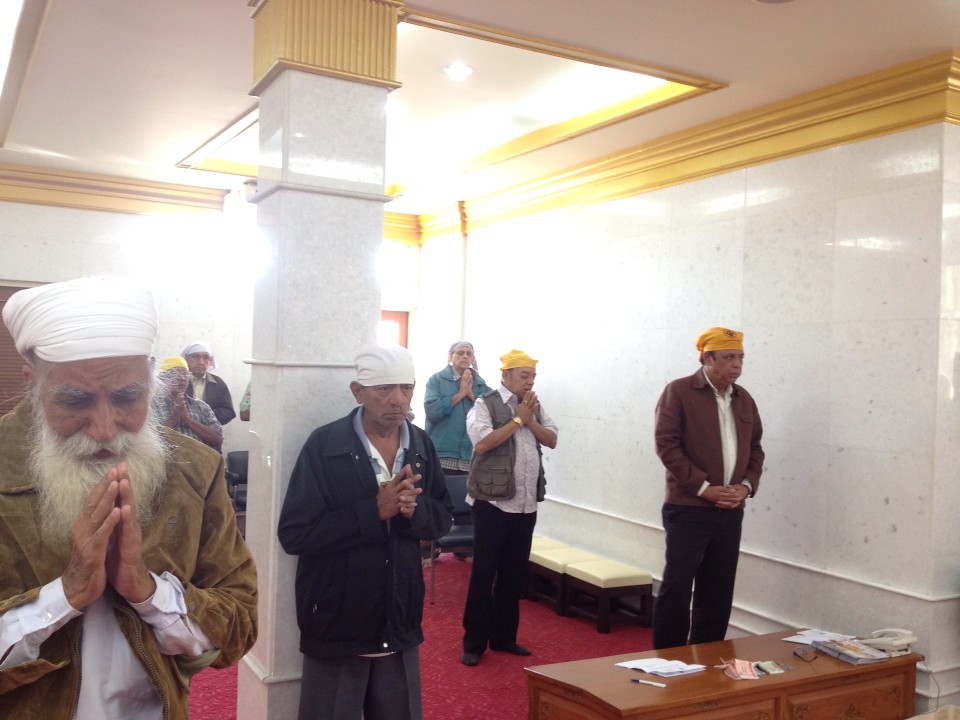 We stayed back after langar and chatted to Giani ji for a while, he spoke quite frankly about his feelings re living in Chiang Mai, his passion for kirtan and how he got to be where he is. Gianiji then met up wth a friend, Sangeet and I had a walk down Charoenrat Road in search of an ATM. After picking up some cash and a few snacks we returned to Baan Chonpakorn where Sangeet relaxed for a while and I popped out for another walk and to see if I could find a laundry. Later, we both had a wander to see if we could find any of these highly rated vegan / veggie restaurants of Chiang Mai!

As we left, the Hotel owners girlfriend who manages this place asked us what we can eat…she has been so helpful. 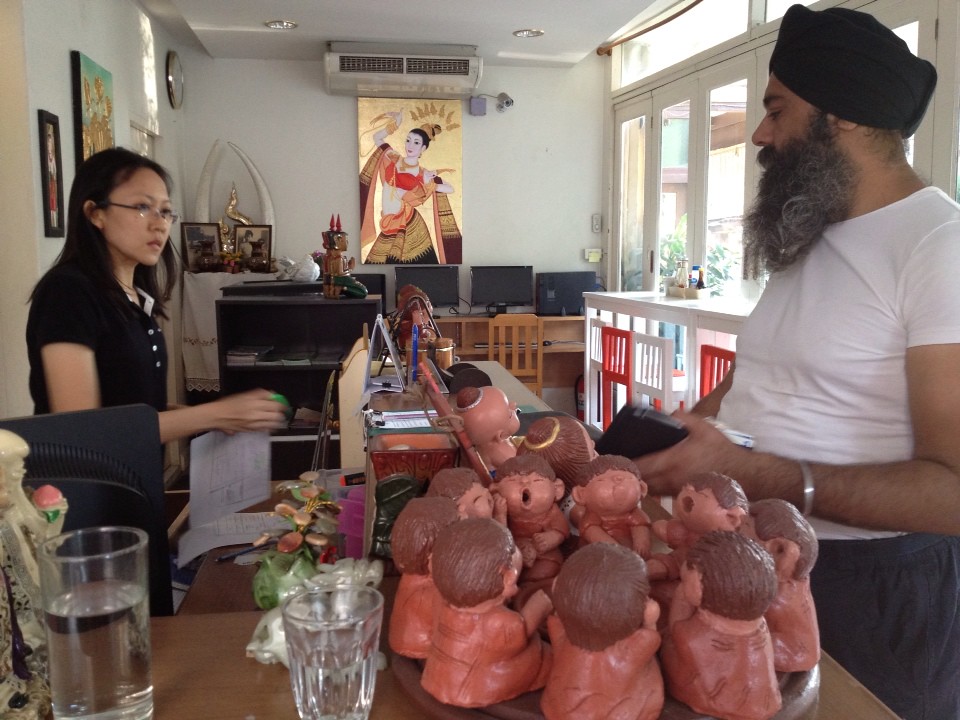 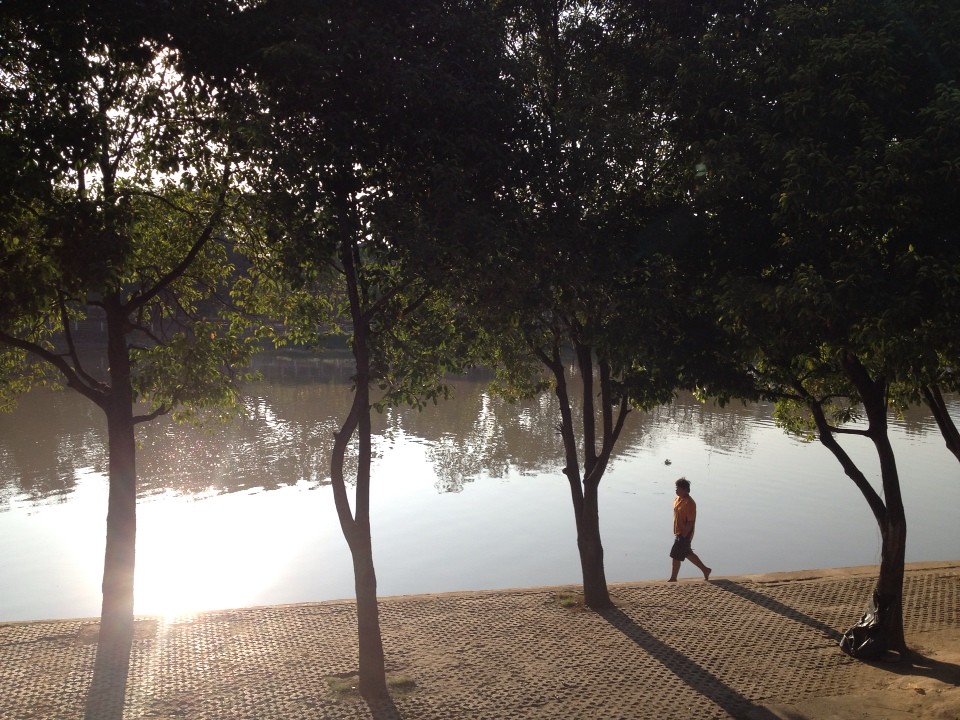 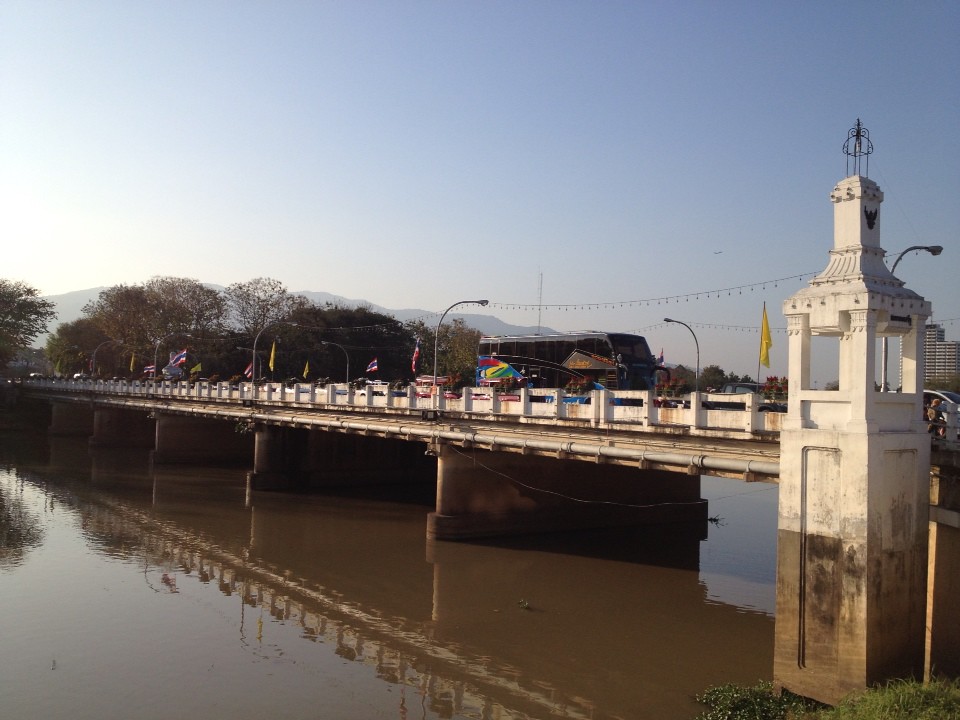 We looked for a vegan restaurant called GIVA but instead ended up at a fantastic cafe and art gallery called Khampang Muang with a great vibe and choice of music. The cafe is next to a vegan cafe, TianZi Tea House and Garden which was closed. At the cafe I had a coffee and Sangeet had a watermelon juice. I even got the owner who was chilling out there to check out my blog: 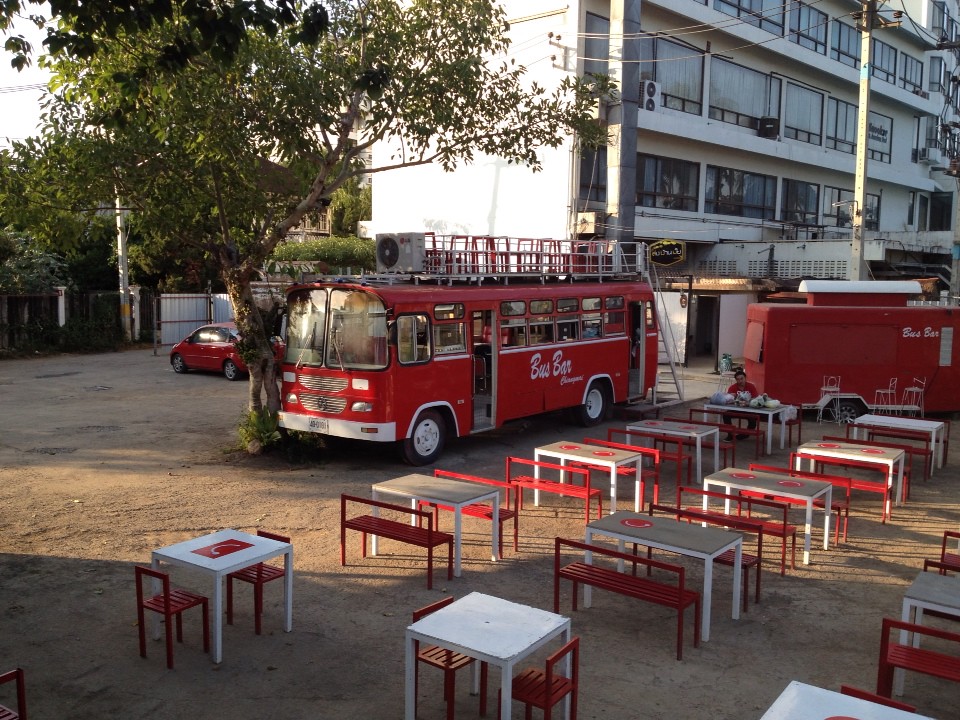 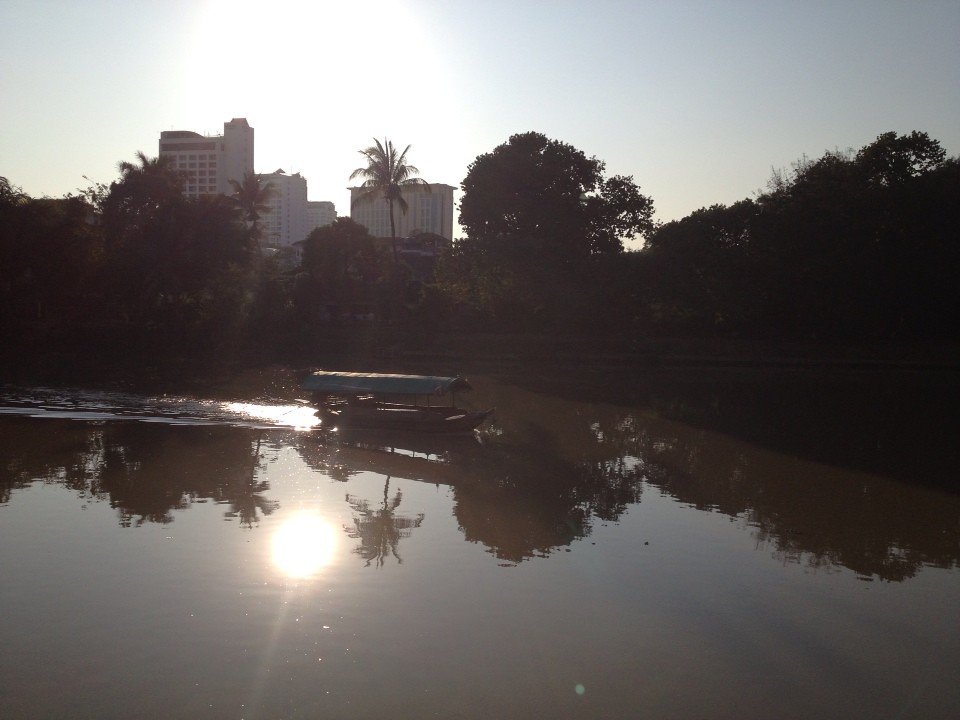 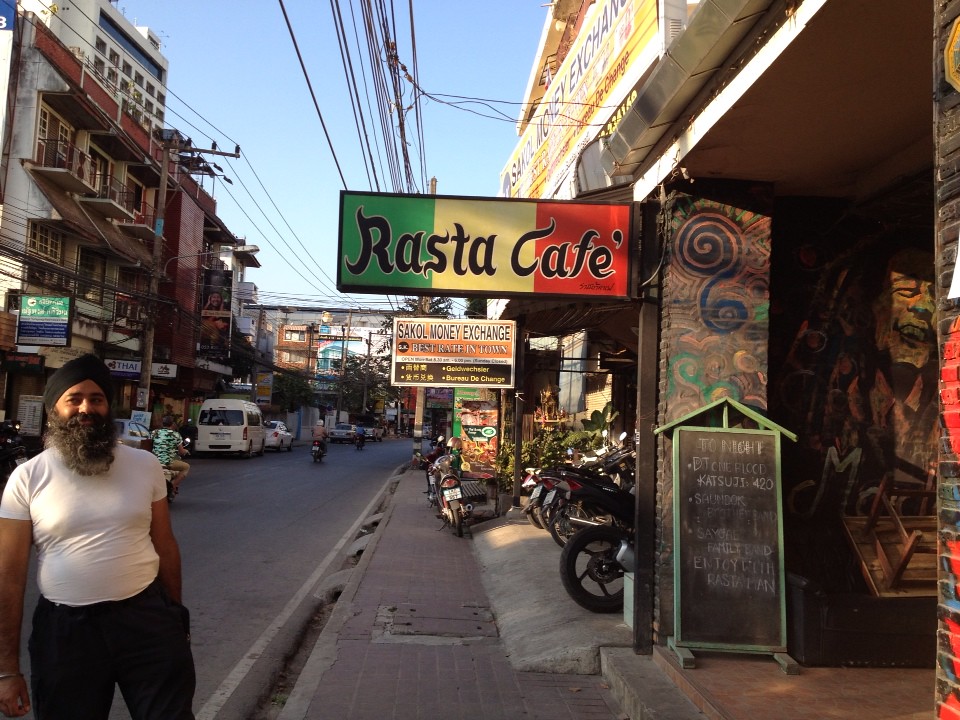 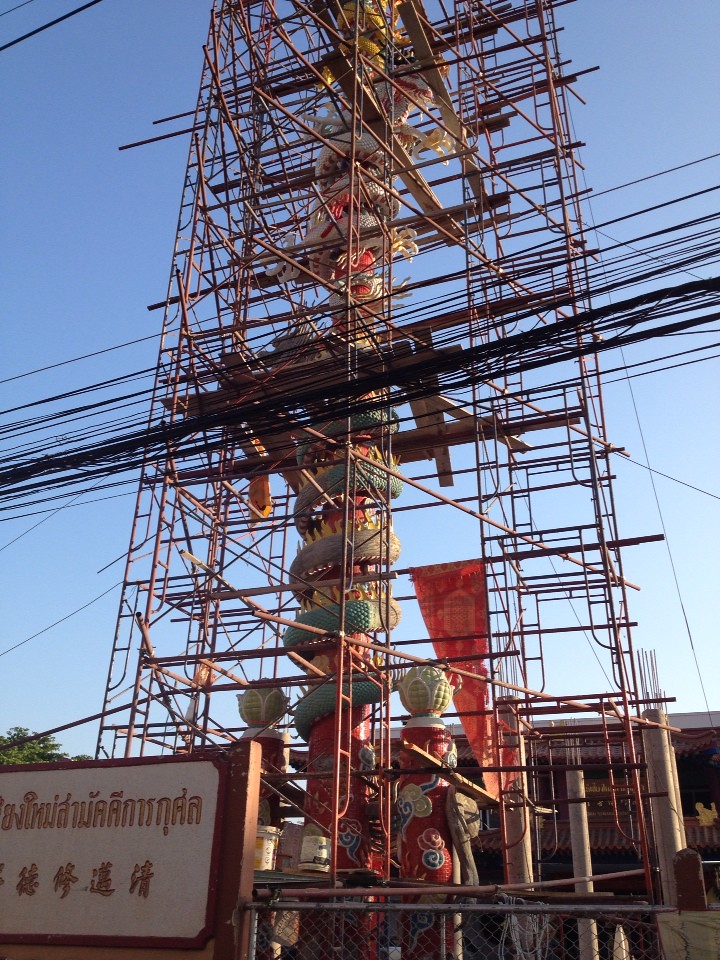 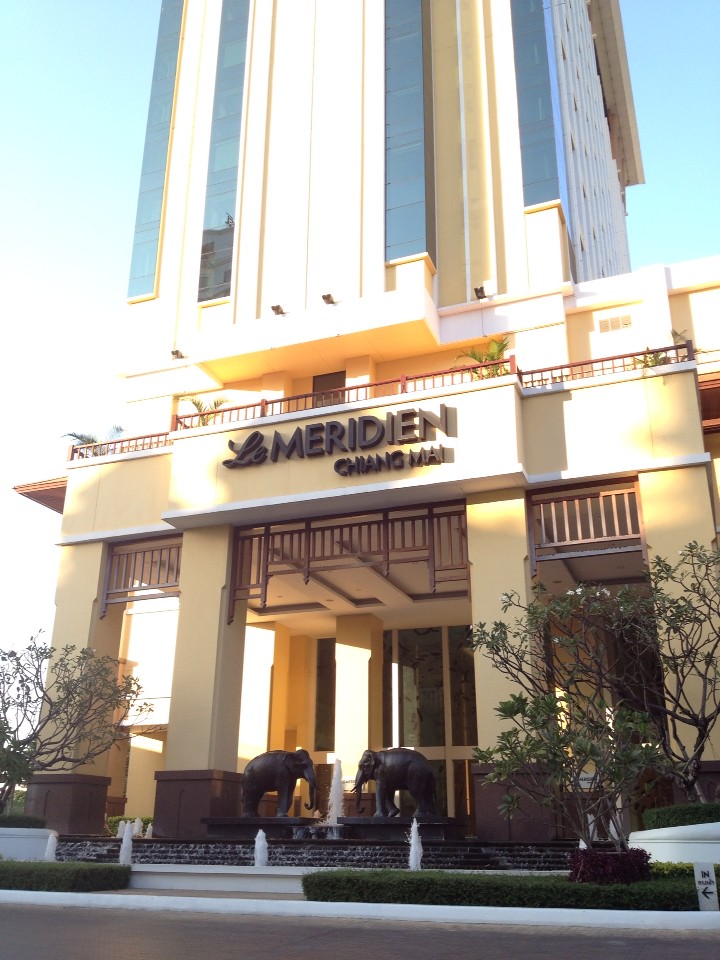 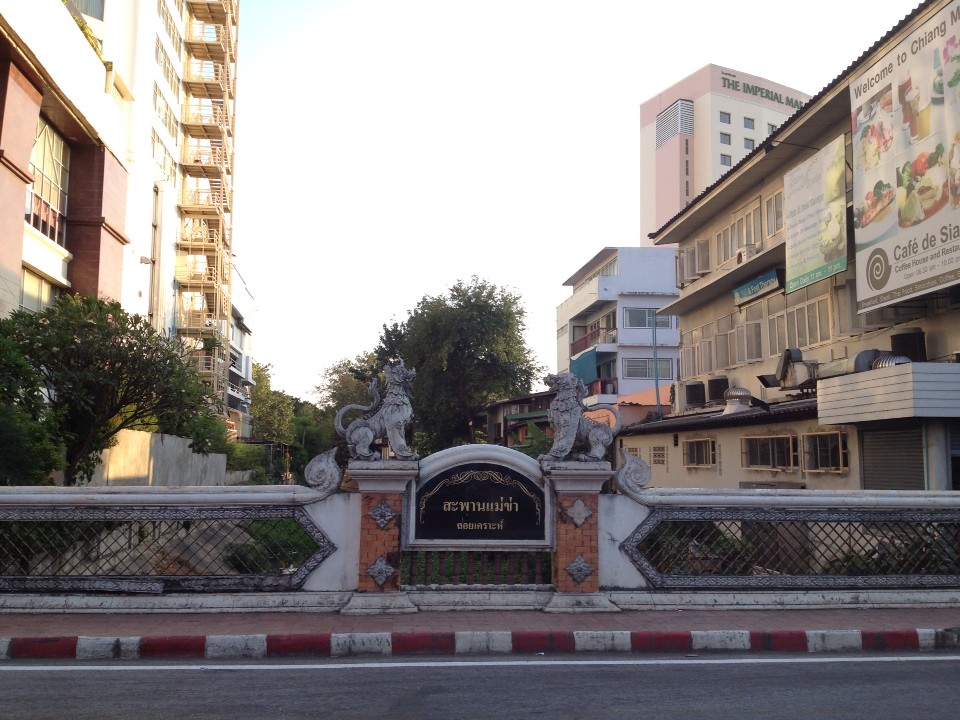 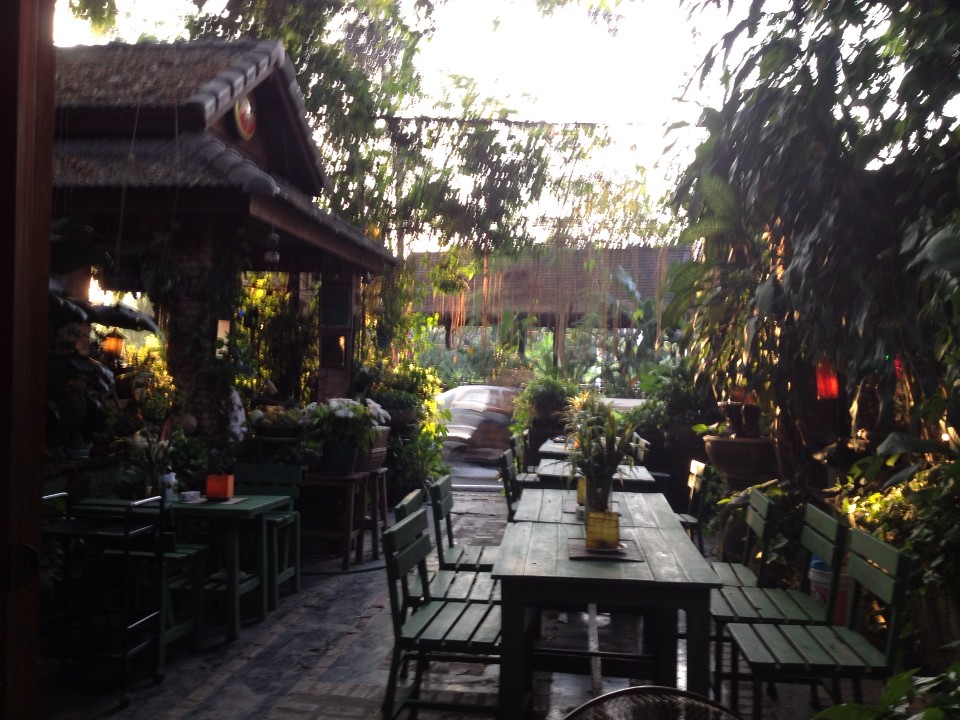 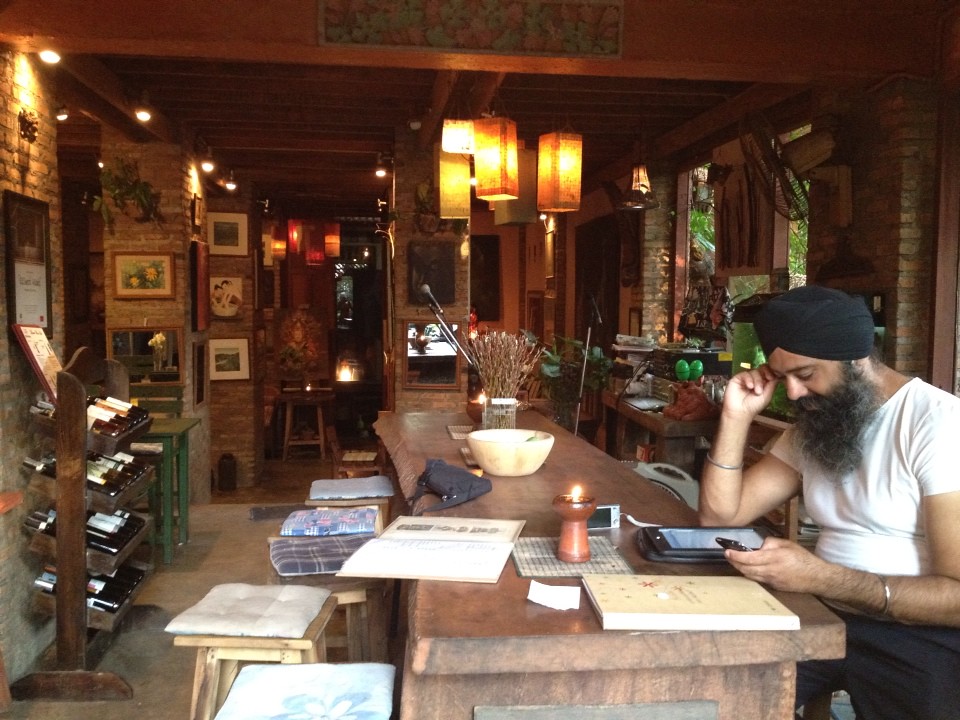 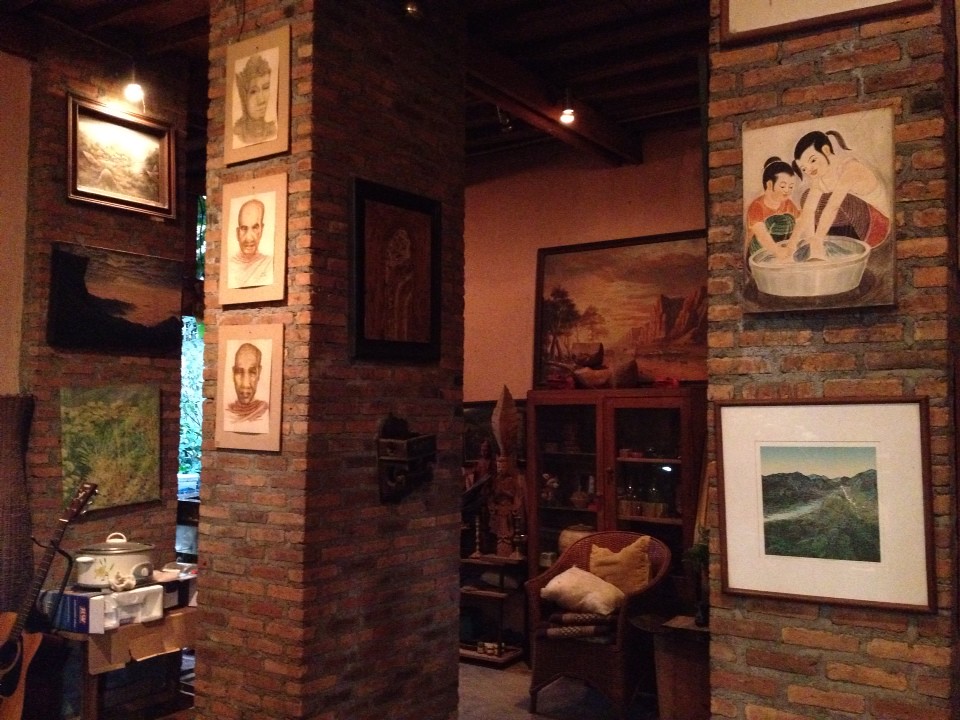 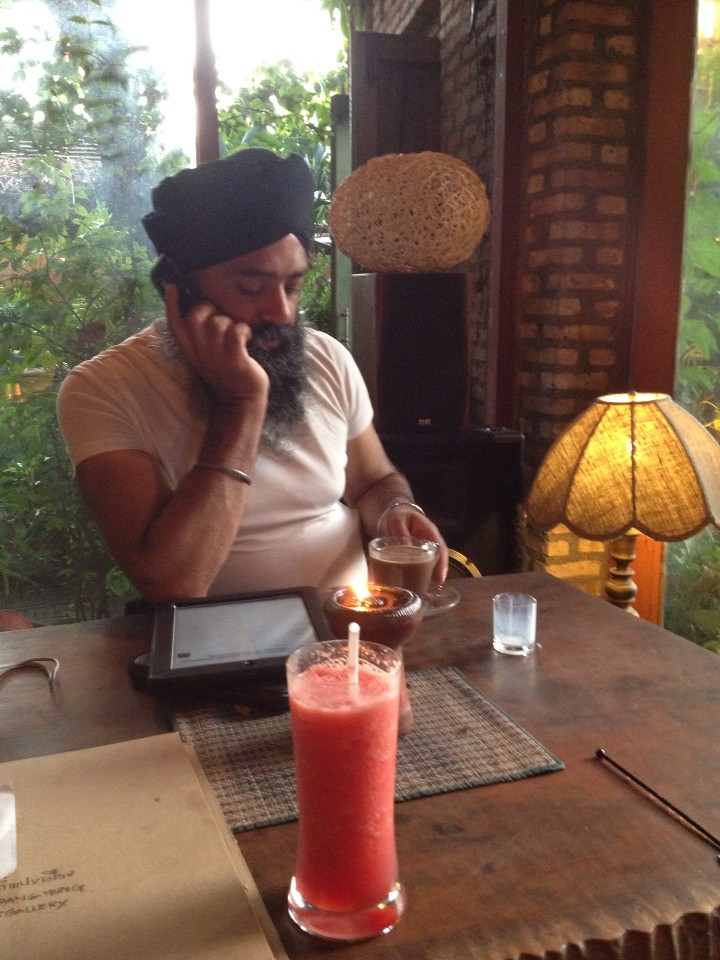 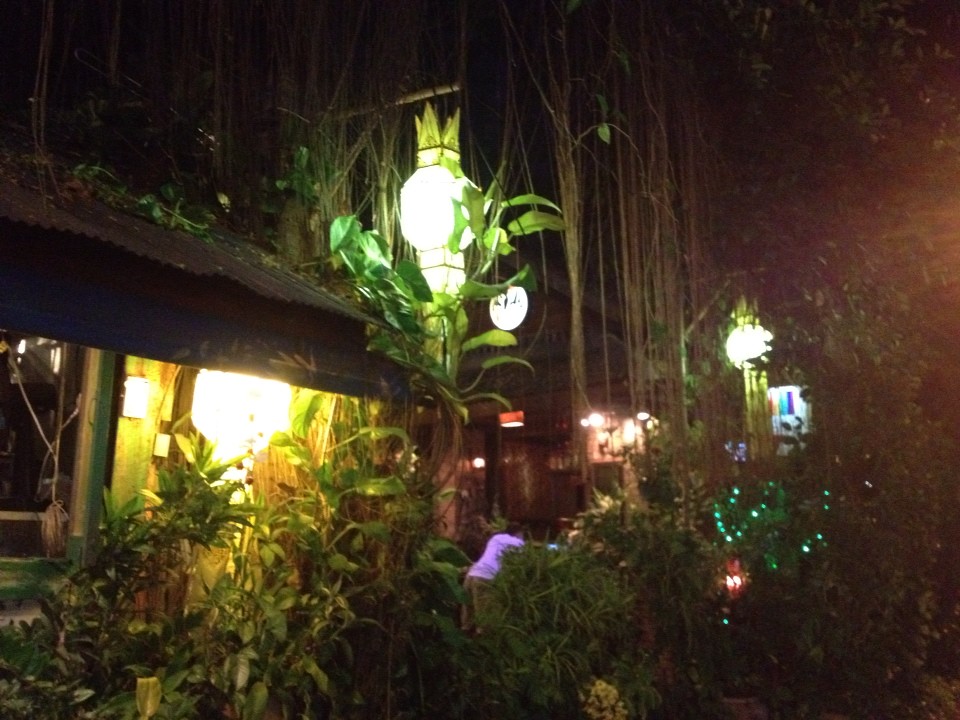 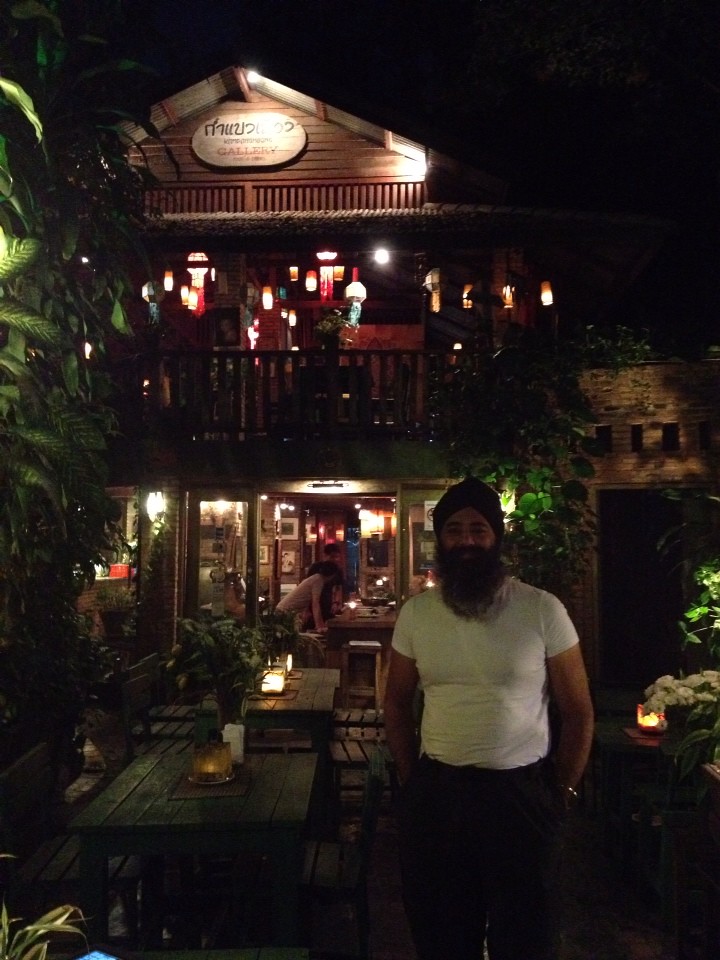 We Skyped mum and dad and chatted for a while. Later, we then popped back next door to see if TiaZi was now open but it was still closed, apparently it has closed down. We decided to walk down to Chiang Mai Gate where there is supposed to be a vegan restaurant. After a twenty minute walk we found the place but they cooked with eggs. Very cheap at 25 baht (about 50p) a dish but not for us. The mock meats there looked very real – A bit too real! We left with some Mango and Sticky Rice from another stall nearby and then dashed back towards the hotel as the laundry was due to close at 8pm. We passed GIVA, the raw and vegan cafe we were looking for earlier: 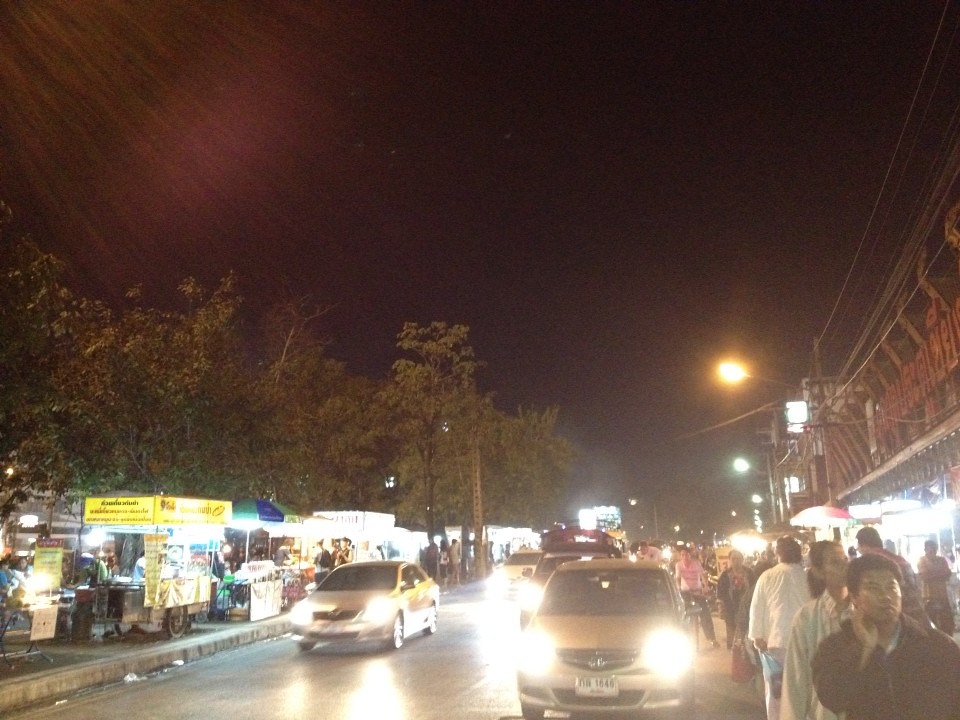 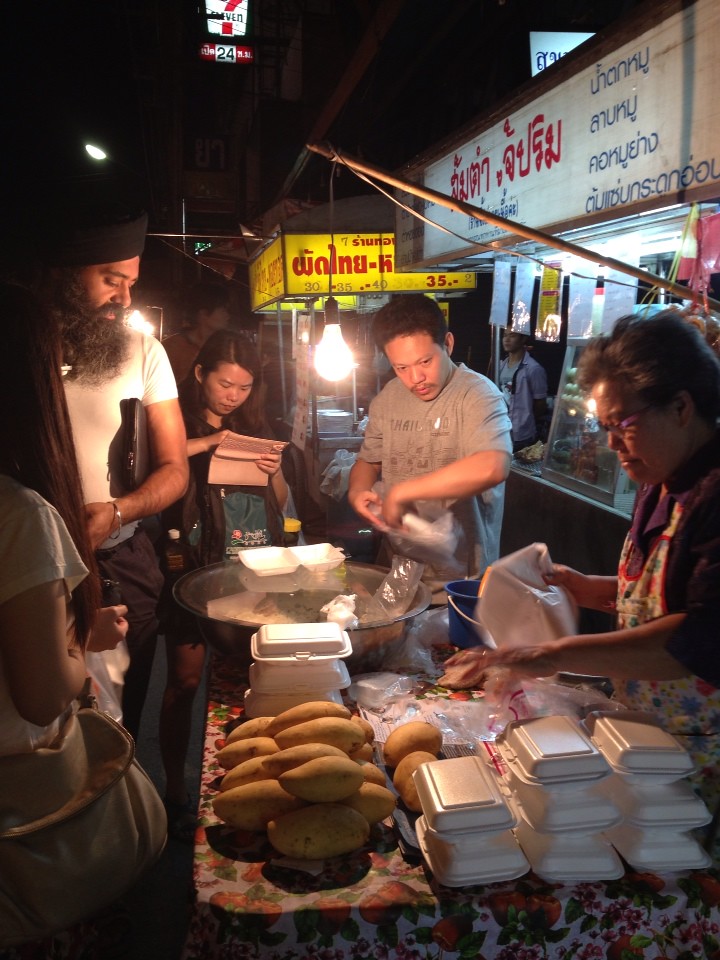 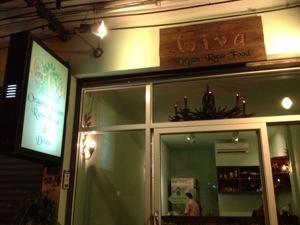 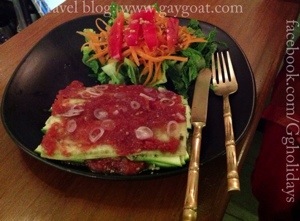 I suggested I meet Sangeet back there in a few minutes as the laundry was not far. While waiting, Sangeet chatted to the owner. When I returned, Sangeet was noting down recipes from the owner and then ordered an Aloe Super Mousse and an Eggplant lasagne. The owner who is also the chef puts a lot of time into preparing the dishes and happily shared the recipes. He was very pleased with the positive feedback. GIVA is a tiny place, but immaculate and very well managed. I decided not to eat as my stomach was playing up. It’s at times like this that I think I should have the surgery…….

After GIVA we wandered through the Night Bazaar which looked completely different to the other day. It looked like a different section, there was some very good quality merchandise. Afterwards I was almost tempted by Pizza Hut, then we made our way back to Baan Chonpakorn where we sat outside and watched crazy motorbikers rocket down Charoenrat Road, then some blogging before bed. 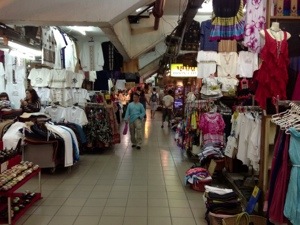