There are a number of ways to get from Auckland airport to downtown Auckland:

1) Taxi, nice and easy and will take you to your destination but it will cost you NZ$70.00
2) Shuttle, depending on how many people are traveling can work out cheap
3) Airbus, will cost NZ$16 for a single trip and will drop you off downtown.
4) Bus to the train station and then train town downtown Auckland,total cost NZ$3.80

We only found out about the bus and train option later in the day, we took option 3 the airbus and got off at stop 3, we had booked into XBase hostel, a room, with no window cost NZ$65.00 it would have cost NZ$75.00 with a window, at the time I thought who needs a window!?!! 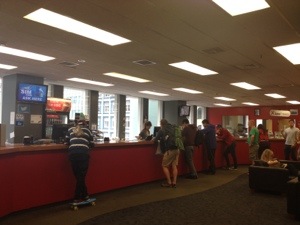 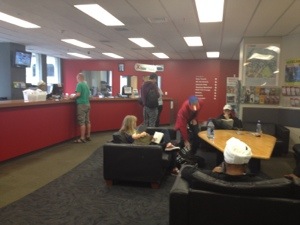 As we arrived there was the usual formalities fill out the registration form and give a NZ$20.00 room key deposit. We arrived at 12:30 and check in opens at 1pm so we waited in the foyer. This place feels more like a business then a cosy hostel, I know hostels are there to make money but they also have the homely atmosphere, this is what is missing here.

After checking in and leaving our luggage in the window less room, which felt strange, we headed out to lunch. Sangeet found a fantastic vegan restaurant called 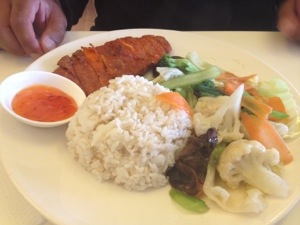 The restaurant is 3 minutes walk from our hostel. At first I was not looking forward to it, thought I would be cold salads but as soon as I found out they do fake meats I was very happy. Sangeet ordered sweet and sour tofu, I ordered roast duck, they had this down to a tee, it was perfect! The ‘duck’ had the fatty texture, if the restaurant did real meats alongside the fake meats I would have questioned asking if they had brought out the real duck!!

After lunch we walked past the Skytower, a tall impressive building in downtown Auckland which has a restaurant, people also sky dive from the top or you can do a sky walk around the edge of the tower. We were last here seven years ago and do not remember the surrounding area being so built up. We then had a walk around downtown to get our bearings, the library offers free wifi so we popped there, we are looking to do some WWOOF work (organic farming) whilst here in New Zealand, Sangeet registered us and contacted some hosts and posted our listing whilst I uploaded some pictures, unfortunately it kicked me out as soon as I exceed the 100 mb limit. Whist here we have found the internet pretty slow, also in Auckland there are very few spots it is free!

We spent 3 hours in the library and decided to go out for dinner, whilst walking a white New Zealander Paul said Sat Sri Akal to us, then asks Sangeet if it is usual for Sikh women to wear a turban, he said he knew about Yogi Bhajan and the women in that community wear turbans but thought that was all, he then gave us some information on Yogi Bhajan! We said we were familiar and that we were both Kundalini Yoga Teachers, the chaps name was Paul and we stood on the corner for half an hour chatting. He is pretty knowledgable about eastern philosophy for a westerner. All of a sudden Nolan walks around the corner, we met Nolan in Rarotonga. Nolan was WWOOFing with Doug, the coconut guy. It felt odd seeing Nolan in a built up city after meeting him in remote and relaxed Rarotonga! We decided to go to dinner together and popped into Dosa Plaza where we enjoyed good food and conversation. Nolan is inspiring, he just left high school and wanted to see the world through different eyes so decided to travel the world alone, all at the age of 18. Listening to Nolan and his experiences we can sense how he is being protected and guided during this amazing adventure he is on.