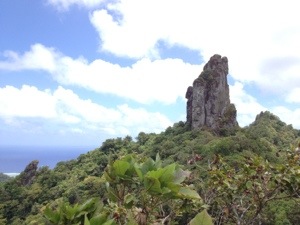 Are we still in Rarotonga…..?

Today we decided to walk the cross island walk, an amazing walk which starts in the north of the island and finishes in the south. One can do the walk from south to north but best starting it in the north, as you can see the marked route more clearly so there is a greater chance of taking a wrong turn, if started from the south. The walk is very challenging but you are rewarded with passing through some of the islands most impressive natural scenery. The walk is about three to four hours, in wet weather it can get very slippery, remember to take plenty of water and mosquito repellent.

About 2km into the walk we met Lee who arrived this morning from LA. he lives in Perth, Scotland. He joined us for the walk which was nice. We did not see anybody else at all during the walk.

Before heading out for the walk we decided to hire a car from the hostel, 24 hours hire for NZ$40, Paul the manager said it will help us tomorrow as we can just leave the car at the airport and he will pick it up. We drove the car to the south of the island and parked it at the end of the cross island walk route, we then took the anticlockwise bus to the north, it was very busy. We began the walk by celebrating with an ice lolly! 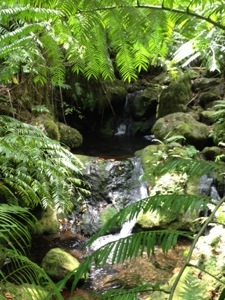 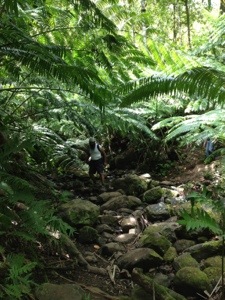 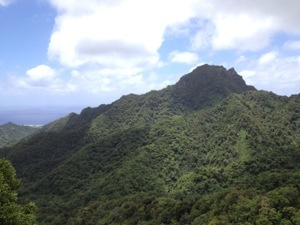 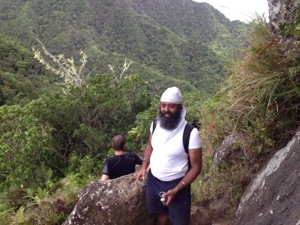 After completing the walk we picked up the car and drove to town, where we dropped off Lee after exchanging contact details. We went for a drink at Club Bana Bistro, Sangeet had a mango, pineapple, papaya and banana smoothie, I had a cappuccino. The smoothie was huge and very tasty!

As we needed to use the internet we popped over to ‘click internet’, a internet shop to use their computers, unfortunately the internet for the whole island was down!! We then popped into the ‘Perfumes of Rarotonga’ I bought a couple of ice pops which were very nice, reminded me of my school days. Sangeet bought a couple of postcards and some gifts. The shop makes soap from the local coconuts.

After some time relaxing at Cooks Corner terminal and watching people go by, we popped back to the car where Sangeet saw a chicken with 11 very young chicks and fell in love with them! She started feeding them salt and vinegar crisps!

We then drove to a restaurant called Tamarind the location and restaurant looked amazing, Sangeet decided to check out the restaurant, whilst I stayed in the car as there were dogs walking around and eyeing up the ‘brown meat’. Sangeet came back and said I should take a look, we ended up ordering drinks and enjoying the views, Sangeet had hot chocolate I had cappuccino. The restaurant had some vegetarian options but could not say if the cheese was vegetarian. We then went to the Indian restaurant called Raviz, we ordered take away and vegetable and onion pakoras to eat there, the pakoras had no flavour and were a disappointment. I ate a few and got the rest to take away, along with Sangeet’s mutter paneer and rice. We arrived back to the hotel in time to see the very cloudy sunset. After some time we popped out to a nearby village hall to see the locals who were singing, it seemed like a play and the singing sounded amazing, it was all in the local language so we are not sure what it was about but still enjoyed it! We stayed there for about thirty minutes before heading back to the hostel.

At the hostel Sangeet had the mutter paneer with rice which were VERY chilli, I had a couple more pakoras which tasted awful. Around the hostel there is a dog, the owners live a few houses away, I gave the pakoras to the dog, he loved them and ate every bit up. I then gave it crackers which it also loved and ate. Unfortunatley I could not find any other food and Sangeet would not allow me to give it the hot mutter paneer. I think I have a new friend especially as it is now sleeping on our balcony!