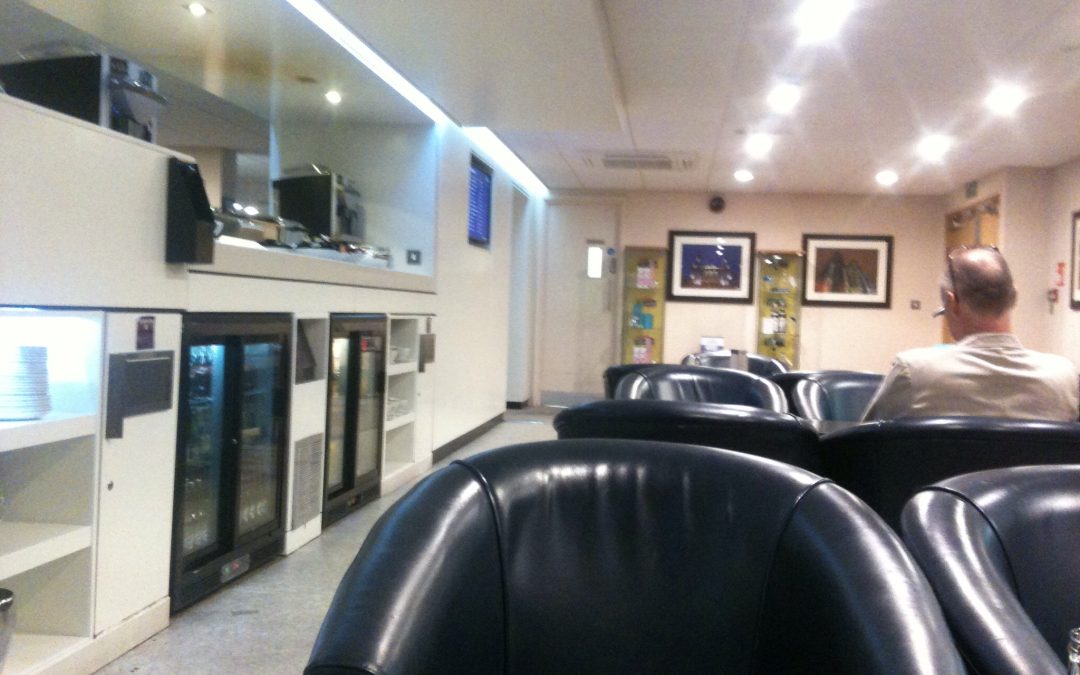 I took the flight with BA from Leeds Bradford Airport to London Heathrow. I thought I would give this trip a go by going paperless, the check in was completed via the BA iPhone app, the boarding passes got stored in passbook (iPhone app). Check-in was a breeze, go to the BA desk scan the iPhone and leave the luggage as per normal. As both flights were with BA the checked-in luggage was tagged for Bangkok.

BA customers can automatically use the fast track, if you are flying with another company you can use it for £3. You wonder that if everybody paid £3 to use it, would it still be called fast track?

Once through security I checked into the lounge. A very basic lounge where one can also pay to get in. 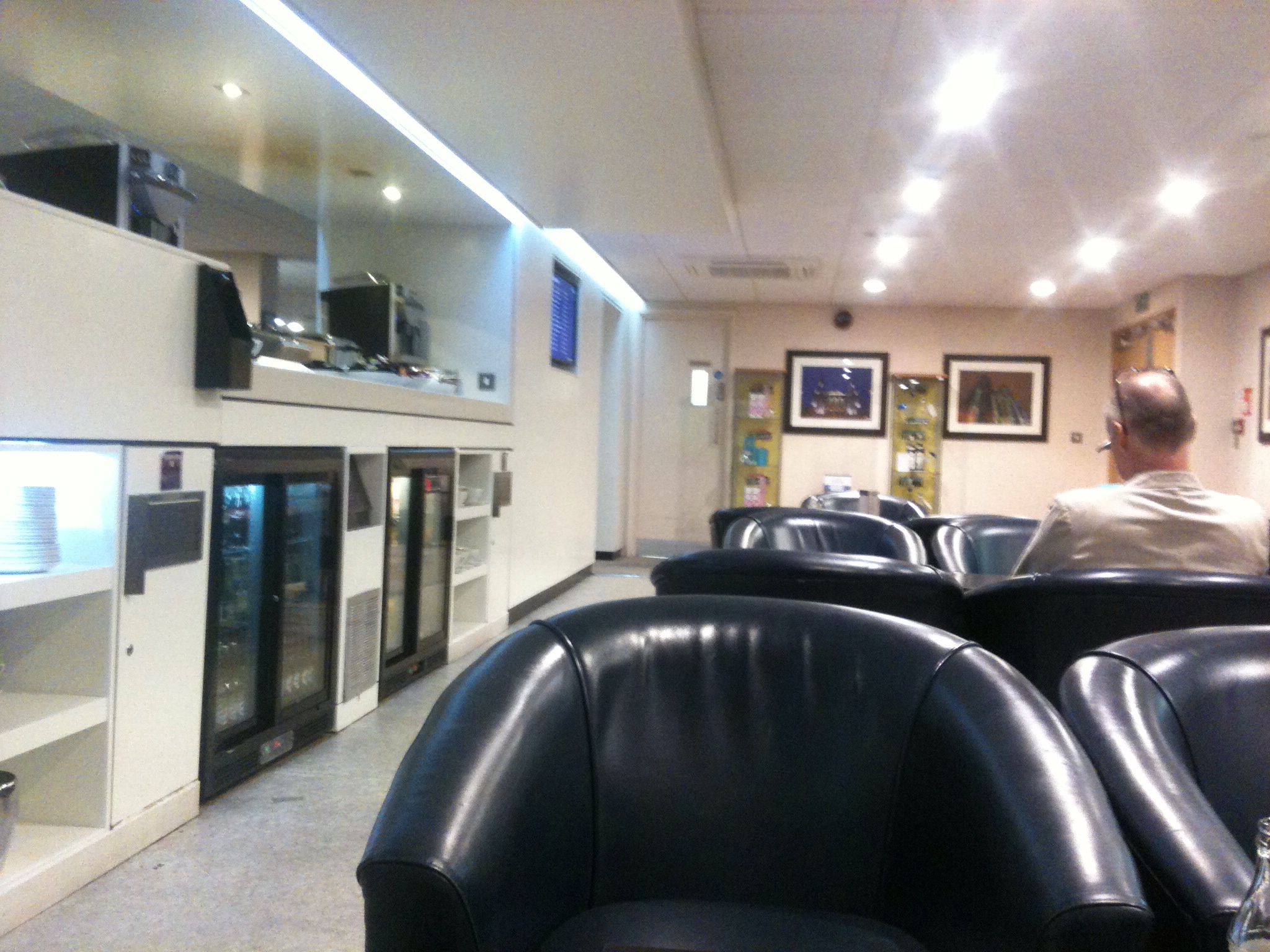 Whilst I was texting with the iPhone it crashed! this shocked me, my electronic boarding passes were stored on it! Luckily after a few minutes the iPhone came back to life. Phew that was close!

The flight which was cheap and cheerful was on a Airbus A319 and took one hour.

At Heathrow I got picked up by Randeep my brother in law and spent a lot of time playing with our niece. She is so active and tired us all out!

Randeep dropped me off at Heathrow Airport terminal 3, as I had already checked in and was issued an electronic boarding pass I went straight to security.

The security queue took thirty minutes, after security I headed over to the BA lounge it was pretty busy and in my opinion over-hyped, hot food was meat meat and more meat. There were some cheeses and cold meats as well as the usual soft and alcoholic drinks. 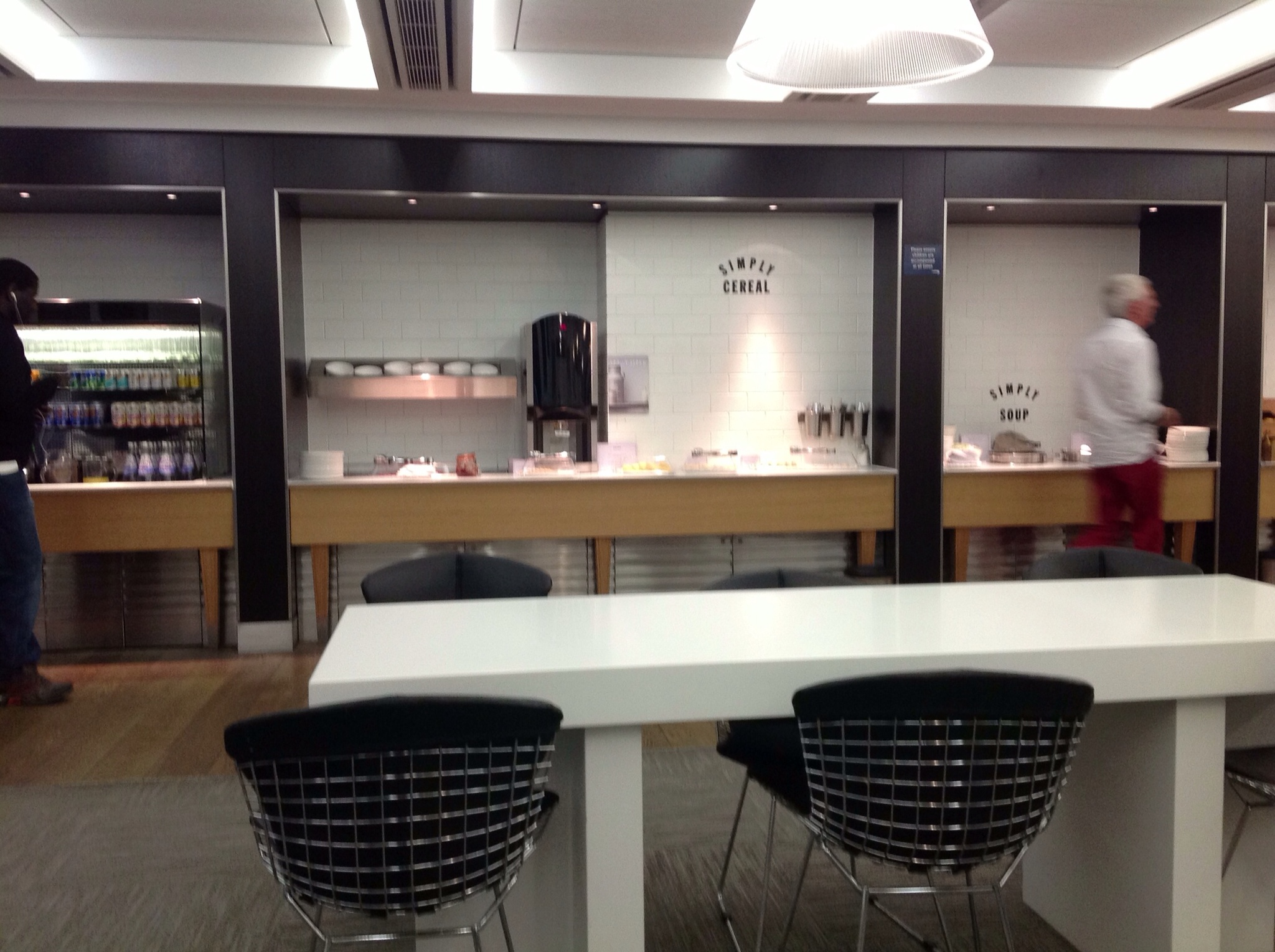 A friendly Sikh lady, called Manjit came over and asked where I was going, I said Thailand and she explained she lived in Singapore.

She asked what I would like. I said it is fine, I will help myself, she insisted and I asked for some veggie food,which she happily brought over. The look from the other passengers was of disgust….they had to get their own food yet here I am being served!

Wifi speed in the lounge is very poor 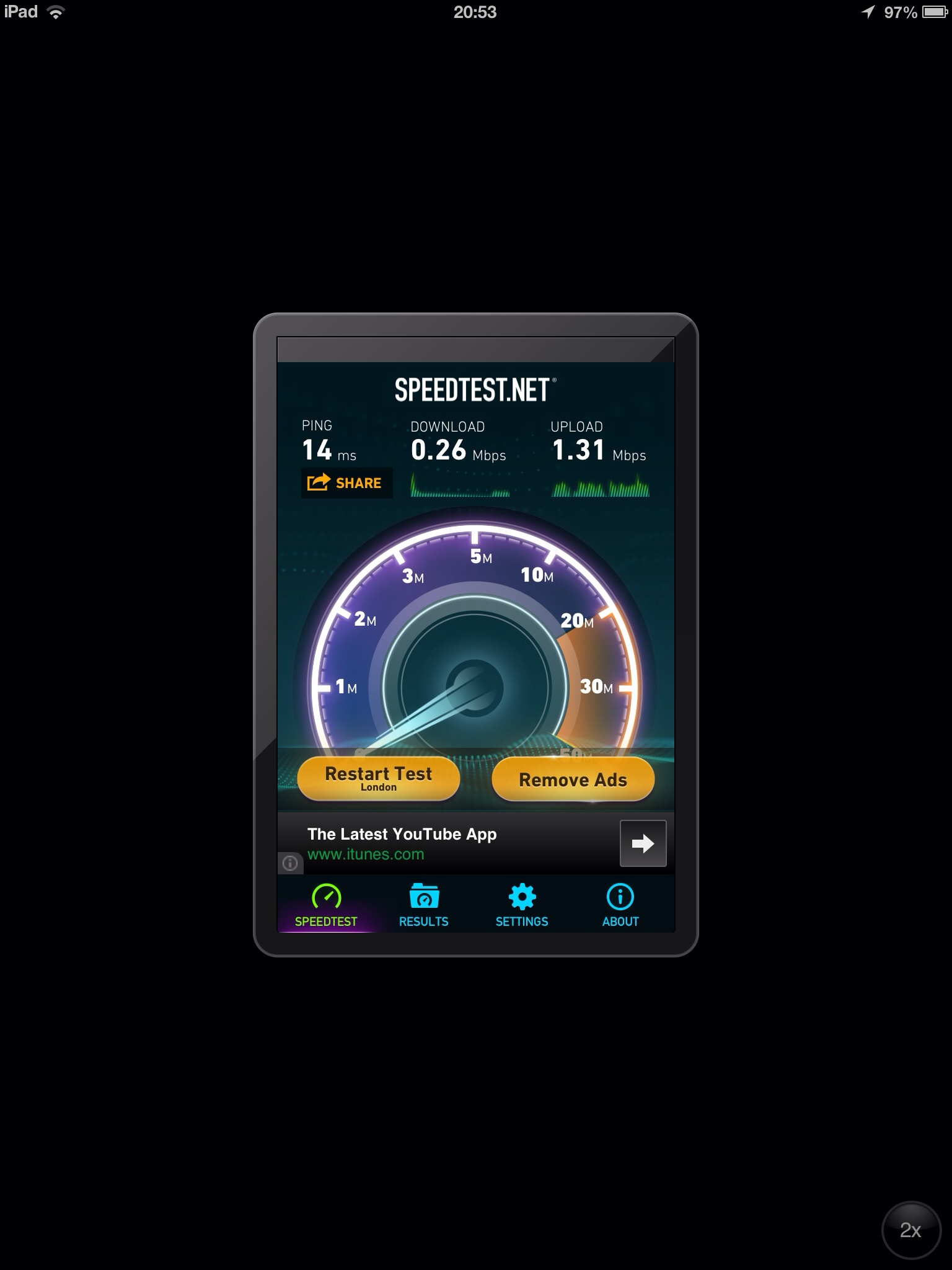 The walk from the lounge to the gate is around 10 minutes. I was seated next to two French ladies. The seats was cramped and the ladies kept talking to me in French, I replied “oui” a few times!! After dinner the lady next to me fell asleep, her legs and arms were all over the place, at one point her hand was near my turban. Her friend had enough and complained to the staff about her. The lady who complained was moved to the back of the plane. A few minutes later the stewardesses said to me “we need to move you.” We started walking to the front of the plane, I had a huge smile, we walked through club world I thought “hey! We are going to first”. They sat me down in World Traveller Plus!! Still should not be greedy! The plane was a 747-400 I was moved to seat 14 A

I watched Fast and Furious 6 a action movie, no thinking involved!

These seats were pretty comfortable and I nodded off….

I awoke around 7am GMT to hear the steward announcing that hot food was not safe to serve as the equipment had malfunctioned overnight, whatever is left over from first class we would get!!

After landing at Bangkok, I went through customs and collected my luggage, Master Pimu called to say he will be waiting at gate 4.

It was great to see Master Pimu and Shun (his wife.). First gear (do not call him this to his face!) took us to the gym, the journey takes about an hour.

We arrived at the gym and was greeted by the other students. Simon a student from Birmingham asked if I wanted to see a fight at the stadium, I said yes……do not ask me why, as I was shattered! Think it was the excitement!

Rajadamnern Boxing Stadium or, in Thai, Sanam Muay Rajadamner is an indoor sporting arena located in Bangkok, Thailand. Along with Lumpinee Stadium, the Rajadamnern is one of the two main stadiums for modern Muay Thai. The stadium has its own ranking system and championship titles up to Middleweight (160 lbs).Muay thai contests are held on every Mondays, Wednesdays, Thursdays, and Sundays. The fights usually start around 6.30 p.m. Ticket prices range from 500 (third class) to 3,000 (ring-side) Baht.

In 1941, the Prime Minister of Thailand, Field Marshal Plaek Pibulsongkram gave orders to build a national boxing stadium on Rajadamnern Avenue. Imprese Italiane All' Estero-Oriente won the construction rights and the 258,900 baht project foundation stone was laid on March 1, 1941.Due to the lack of construction supplies during the World War II, the project was halted until August 1945. When the war ended and the construction resumed, it took only four months to complete it. The first boxing match was held on December 23, 1945. Tickets were priced at between 70 and 300 Baht. Pramote Puengsoonthorn became the first stadium manager, who remained in the post until his retirement in 1947.The original stadium was an open-air construction, resembling a Roman amphitheatre in design. Six years later, in 1951 a concrete roof was added, making it more convenient and weather-proof. After seven years of government ownership the stadium was running in loss and on May 24, 1953 Chalerm Cheosakul, the stadium manager at he the time, asked permission from the Crown Property Bureau to run the stadium and founded the “Rajadamnern Co Ltd”. The Rajadamnern Co. Ltd operates it to this day and it has become one of the world-renowned boxing stadiums of Muay Thai in Thailand.In 1969, Rocky Marciano attended Rajadamnern as a guest referee for the International Boxing title match between Raksak Wayupuk and Saknoi Sor Kosum. Since then the tradition is kept that the last fight of the night is always an International level fight. Chuwattana Muay Thai & Boxing camp is the official promoter of the Rajadamnern stadium licensed by the Thailand boxing commission.

Gambling is legal and takes place at the second level. The betting is done by hand-signals, as in a stock exchange trading floor. Often such signs are misunderstood by one side and additional fights may erupt outside the ring between gamblers. The security service at Rajadamnern Stadium is managed by armed Military Police officers. Foreigners usually occupy the expensive ringside seats, while gamblers and aficionados prefer the second or third ring of seats upstairs.

There were ten fights, the main fight everybody was excited about was between Saenchai and Kongsak. The fighters were amazing and all we could hear were shins clashing! 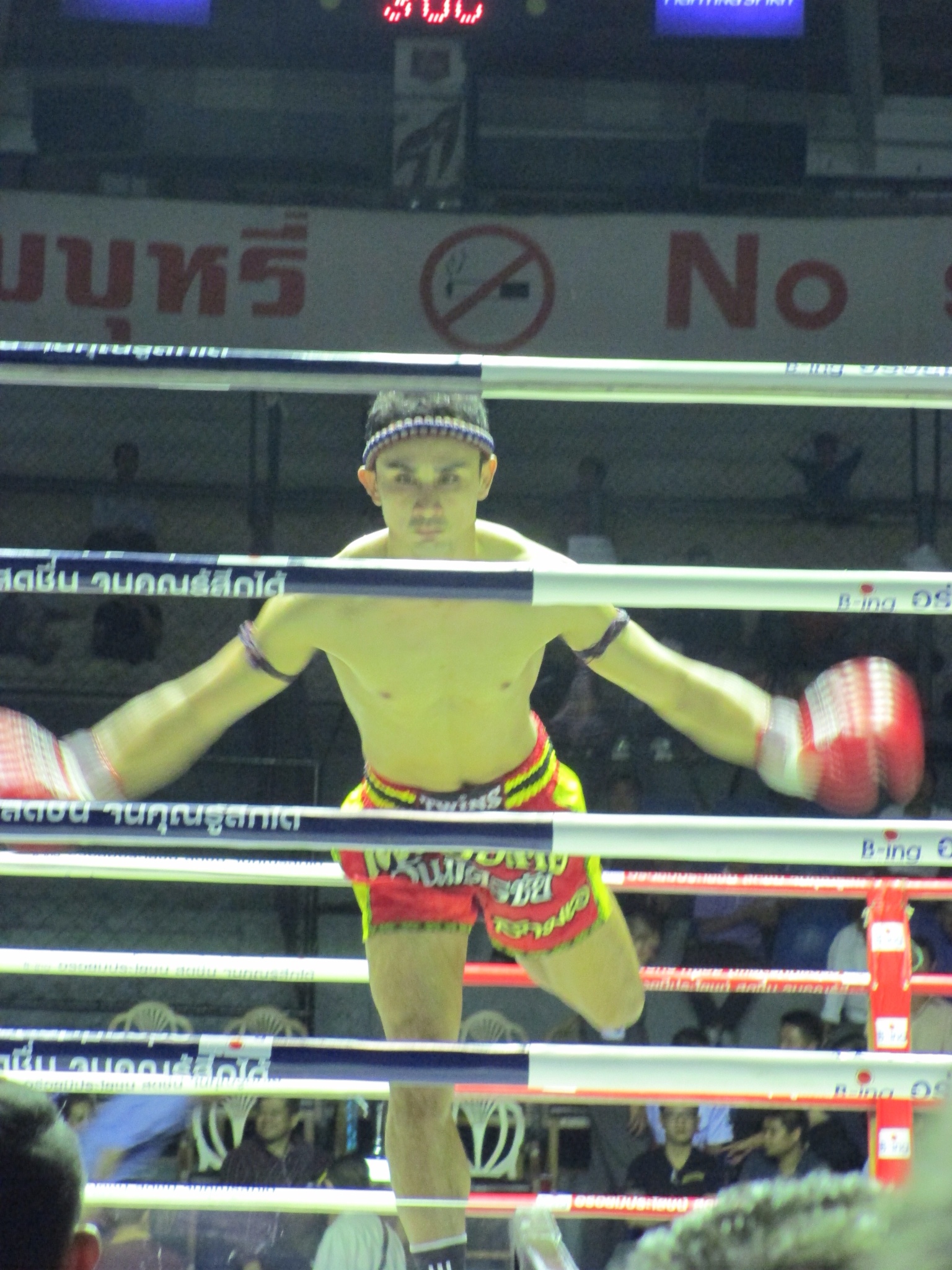 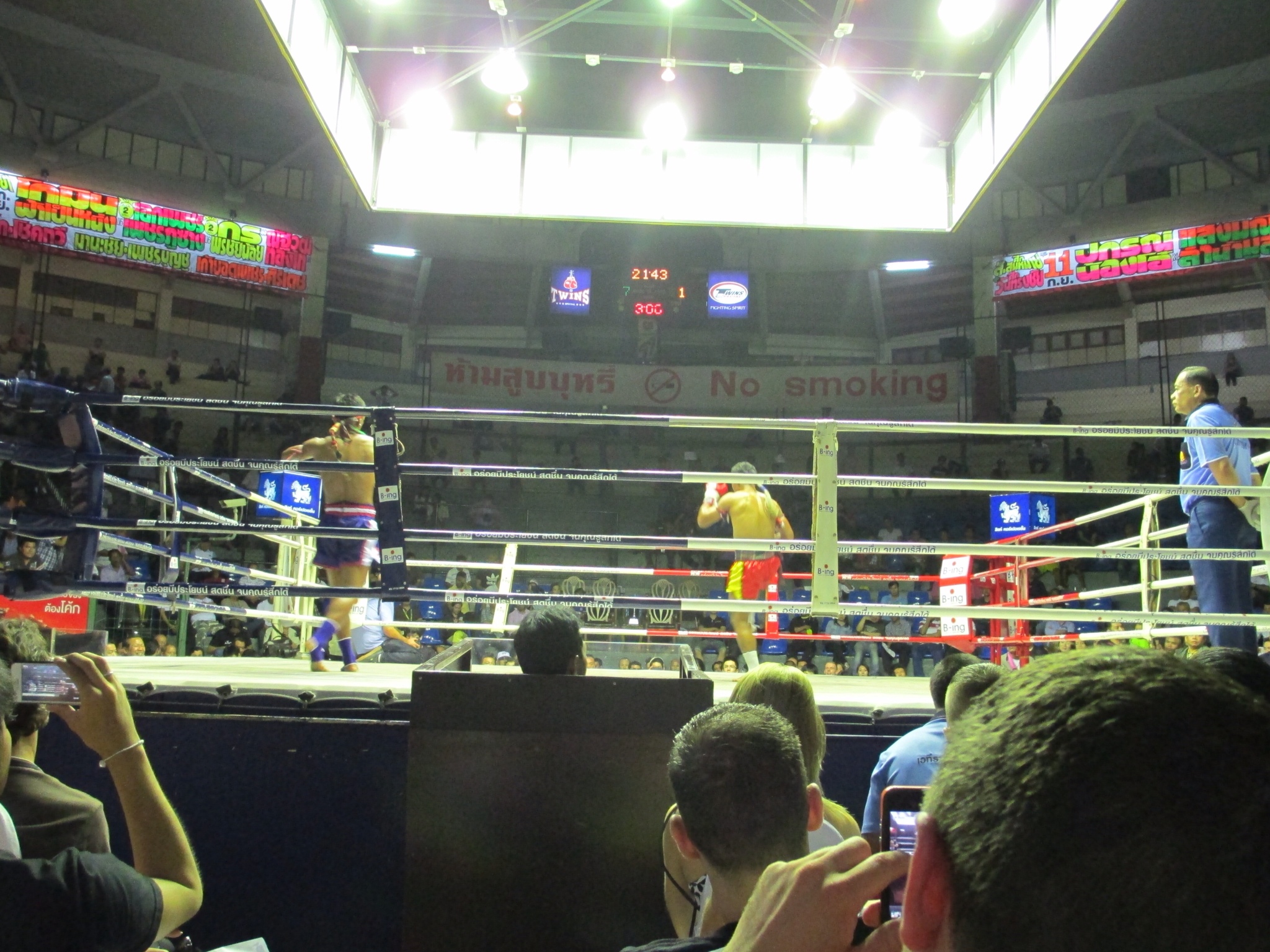 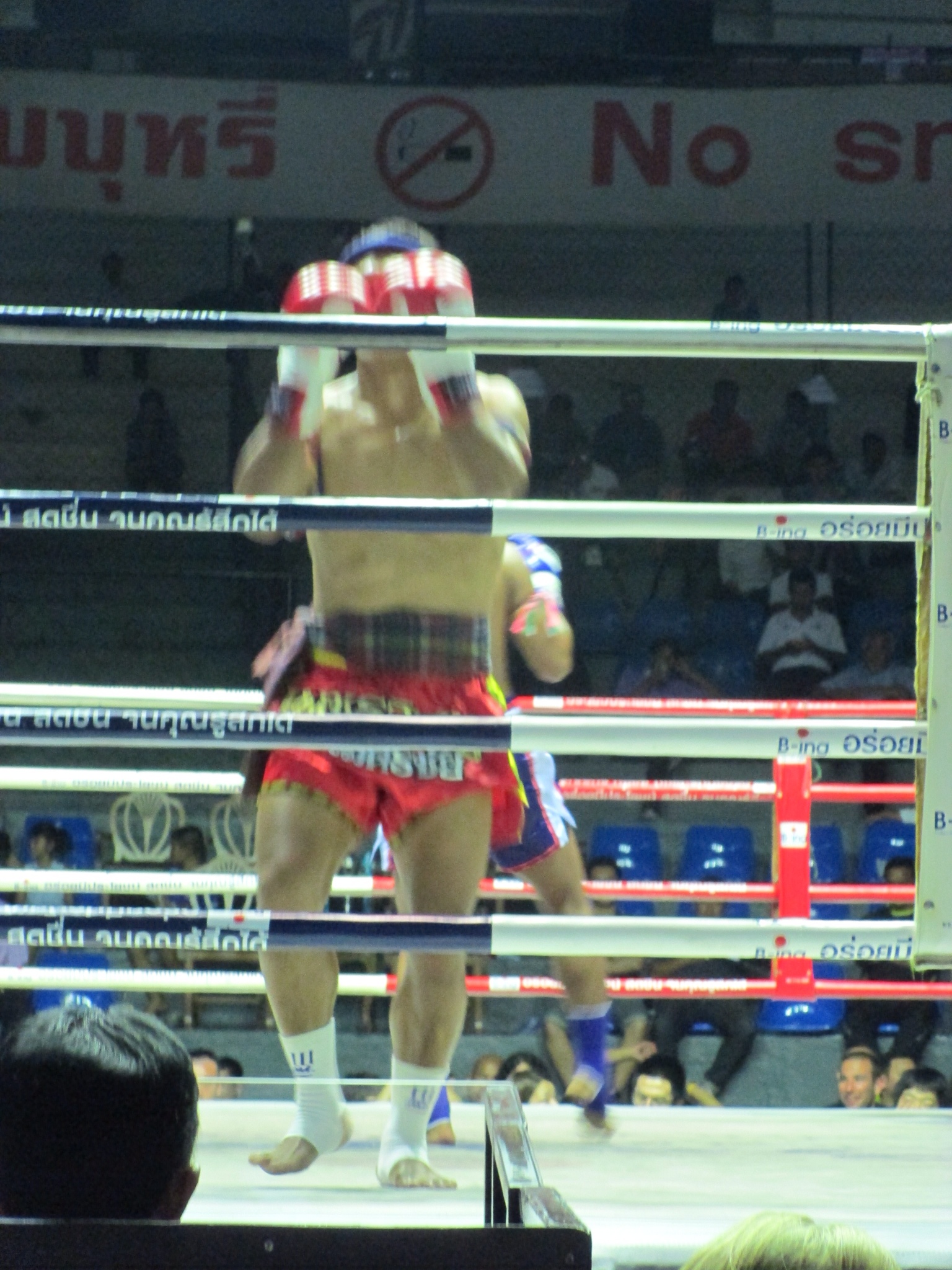 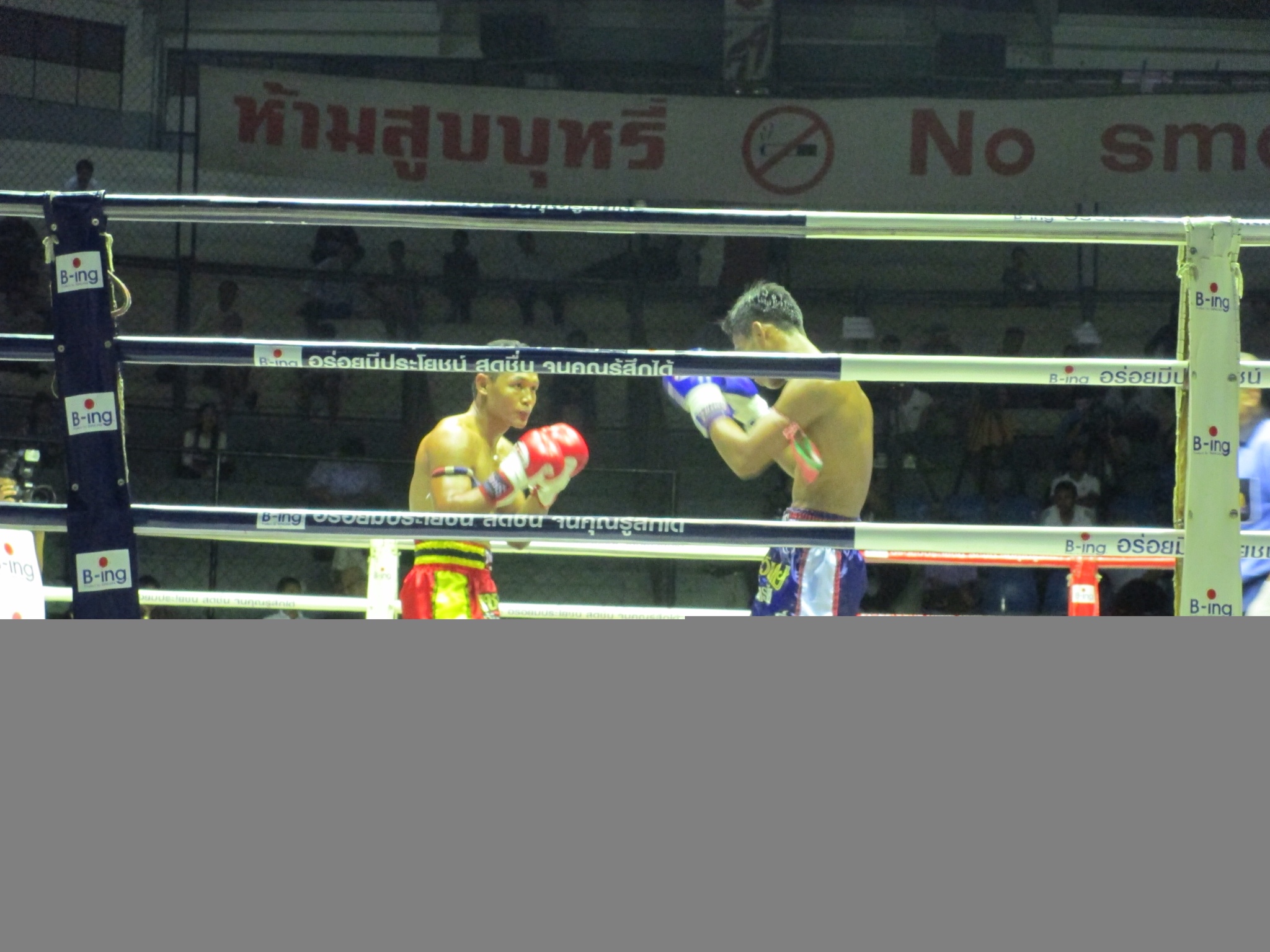 Outside the stadium there were various stands selling food, I got a corn on the cob. 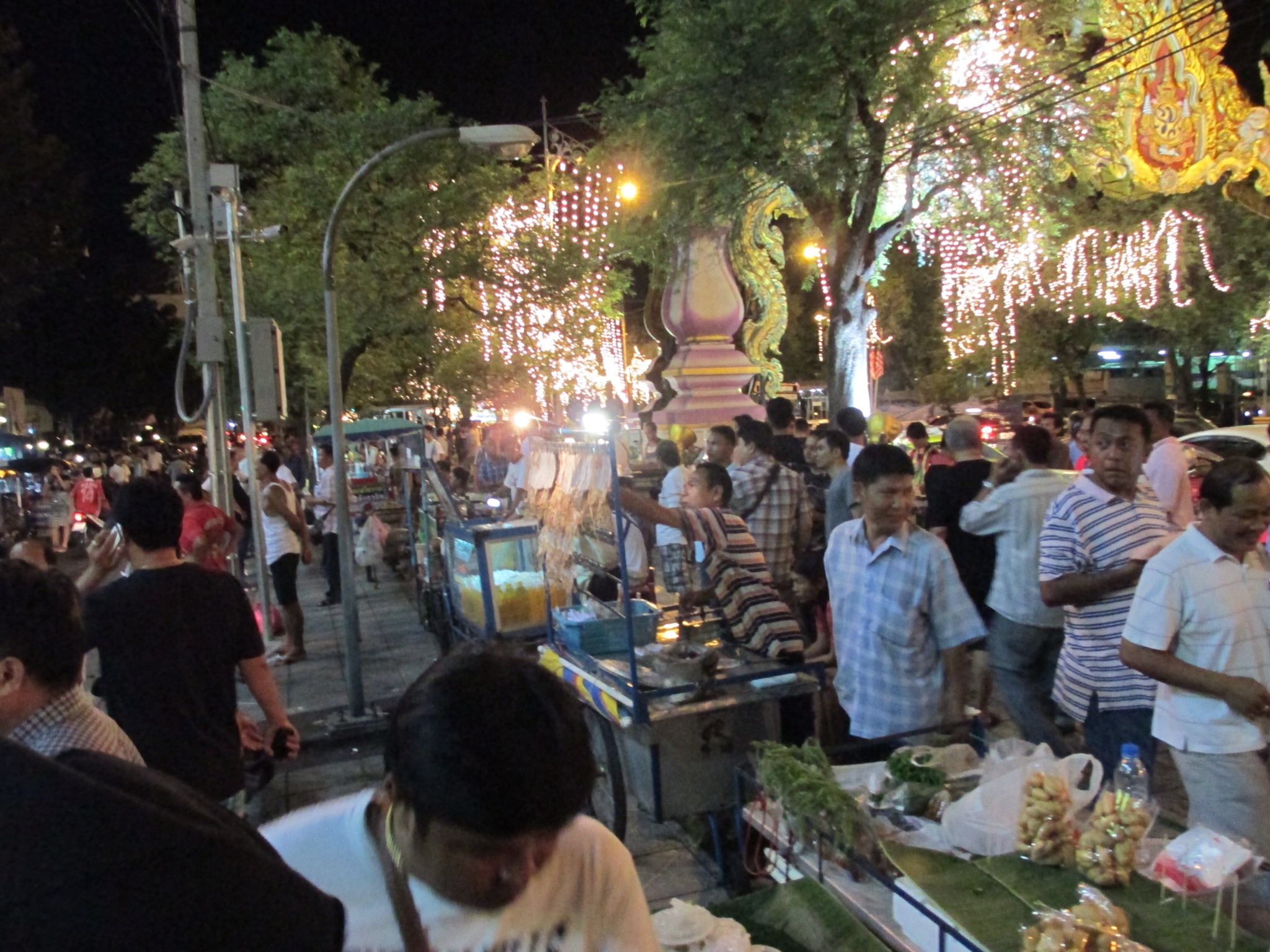 As soon as we got back to the gym I put my head down and was out like a light…..

There is a guy on this flight to Chicago listening to ACDC!! Wow that brings back memories, will have to download some of their music.

“Twenty years from now you will be more disappointed by the things you didn’t do than by the ones you did do. So throw off the bowlines, sail away from the safe harbor. Catch the trade winds in your sails. Explore. Dream. Discover.” – Mark Twain

After a month of thinking about doing the KRI teacher training level 1 in Espanola, I have finally registered…..just has not sunk in! I am feeling very nervous and at the same time very excited.

I am very lucky that Sangeet has already completed the course two years ago, so can advise me on what to expect.

So the next task was to book the flights, we thought as I will already be in the US, Sangeet would join me towards the end of my course and we will travel for a few months. therefore the choice of tickets we have is as follows:

The ticket which was more suited to our plan and budget was The Great Escapade, I contacted a number of travel agents and was very surprised to see a huge difference in the price. In the end we booked the ticket through Jackie from Travel Nation telephone: tel:01273 320580; email: [email protected] She is very knowledgeable and their prices were the cheapest.