Lets stop the night in Acarta…..

We decided to stop in Acarta for the night, as most places I go, I try and find fe wifi! There was one showing up saying Hotel Acarta, so we looked for the hotel, the rates were very reasonable and we booked a room. The reception give you a parking permit allowing you to park overnight for free. After securing the room, we wandered around the downtown shops. Boy you can just smell the marijuana in the air.

“The Hotel Arcata is a National Historic Place and fully operational hotel located in Arcata, California. It was built to accommodate visitors to Arcata, California, drawn by the Humboldt State Normal School (now Humboldt State University) and delivered by the Northwestern Pacific Railroad. In 1920 the Redwood Highway, US 101 provided more access to Arcata.
The hotel was renovated in the 1980s and was acquired by the Big Lagoon Rancheria, becoming the first off-reservation Native American-owned hotel in California.”

Also what was nice was the number of people saying Sat Nam to us. They may not know that we are Sikh but they do know Kundalini yoga and can link us to that, amazing!

Whilst we were walking we passed the Minor cinema, one of the oldest, if not the oldest theatre in the USA. The Minor Theater, located at 1015 H Street in Arcata, California, is one of the oldest buildings in the United States built for feature films that is still open and showing movies. It was the first building in Humboldt County to be built as a “true movie theatre. We walked in and decided to watch the 9pm showing of ‘Trouble with the curve”

We walked down to Wildflower cafe for dinner, which was again fantastic, we can definitely recommend this restaurant.

After the meal we headed back to the hotel to freshen up before going to the cinema. The theatre was small and very nice. The movie, which has Clint Eastwood and Justin Timberlake, had a great story line and very good acting from all.

Had a great walk back and saw a few people ‘high!’ Entered the hotel and you could smell marijuana walking to our room……this will be a fun night!!

Walk through the corridors at Hotel Arcata, passive smoking will make you high! 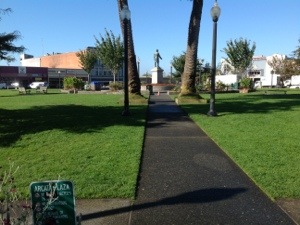 About 66 miles into the journey we stopped at a fantastic vista point, Sangeet suddenly said “where is my green bag” then we realised that it was left at the cafe! Both our mobile phones did not have coverage so we had to rush back, we arrived at a town called Willow Creek where we managed to call the cafe, they said they had the bag…phew! I still wanted an excuse to drive fast on the winding roads so put my foot down and made good progress! I miss the sports car!

We picked up the bag from the cafe and then decidedly explore Acarta some more, we parked up, the majority of parking in Acarta is free but limited to two hours, we wandered and sat in the Acarta plaza, a piece of grass marking the middle of the town. There were many students. Some guys practicing yoga and some juggling, what a fantastic atmosphere. 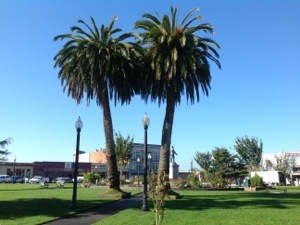 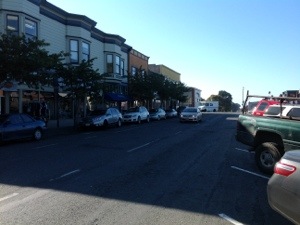 After leaving Trinidad we headed south on 101 to a university town called Acarta. As soon as you enter the downtown area you can see that the hippy generation is very much alive here. We drove a couple of blocks when all of a sudden somebody shouts SAT NAAM! That just felt so amazing to hear, I did not know who it was but shouted Sat Naam back!

We needed some cash so drove to Chase bank, unfortunately they charged $3 per transaction so we declined and carried on exploring the downtown area by car.

Sangeet remembers there was a vegetarian cafe in town, as we could not find it we decided to drive the two hours to a town called Redding, then all of a sudden the cafe was on the corner! As we were both pretty full we decided to park up and ‘just’ look at the menu.

After ‘just’ looking at the menu, we decided to sit down and order some food, well we might as well review it now that we are here!

Sangeet ordered a scrambled tofu and I had Eric’s favourite, a burger consisting of grilled tofu, portobello mushroom and onions. Both meals were fantastic!!

Afterwards we started our journey to Redding, taking the 101 north then 299 east. The drive was amazing and we drove through Trinity national park. What spectacular views! 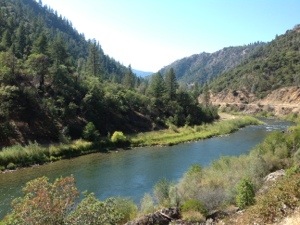 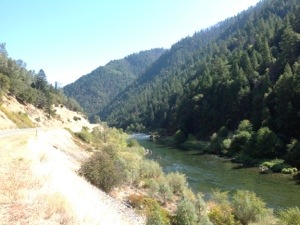